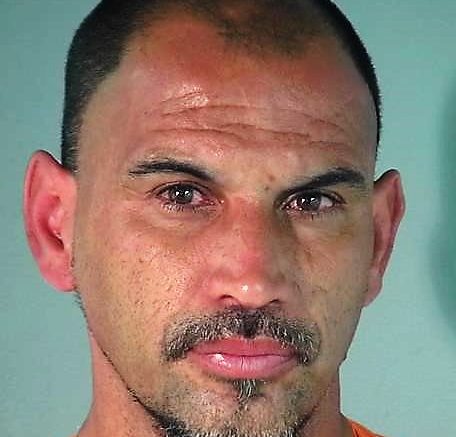 SAFFORD – A potentially deadly situation was averted Tuesday night when officers talked down an agitated subject who was wielding a shotgun.

Officers were dispatched to 1020 W. El Paso Blvd. at about 6:24 p.m. regarding a possibly suicidal man with a shotgun who had assaulted his wife. The victim identified the suspect as Arnold Sanchez Jr., 41, and said he was possibly under the influence of alcohol and/or methamphetamine and was acting irrationally.

Upon arrival, multiple officers cordoned off the area with their patrol cars and blocked traffic about a half a block from the residence. Safford Police were assisted at the scene by Graham County Sheriff’s Office deputies and Thatcher Police Department officers. As they were blocking off the scene, officers learned Sanchez was alone in the house.

While holding their position, a woman informed an officer that she had Sanchez on her cell phone. The officer spoke with Sanchez and asked him to put the shotgun away and come out of the house.

Sanchez appeared agitated and refused the officer’s instructions. He allegedly said he was just upset over losing his job and that he wasn’t going to hurt anyone. During their conversation, the officer could hear Sanchez cycling the shotgun. When asked about the weapon, Sanchez said he had unloaded the gun and put it on the couch. He then agreed to exit the residence and was taken into custody without further incident at 6:41 p.m.

“The responding officers did an outstanding job of resolving a potentially dangerous and violent situation with minimal use of force,” Safford Police Chief Joe Brugman said. “This is an example of excellent police work.”

After Sanchez was taken into custody, officers swept the house and located a 12-gauge, pump-action shotgun on a couch with several shotgun shells scattered throughout the room.

The victim said Sanchez had been acting strangely earlier in the day after picking their son up from school. After he dropped their child off at their residence, he left in a SUV, and the victim discovered a suicide note.

The family then left to try and locate Sanchez. When they returned home, the SUV was in the driveway and all of the doors to the residence were locked.

The victim said Sanchez eventually let them inside the residence and she confronted him about the note. He then allegedly handed the shotgun to his son and told him to fix it because it was jammed.

Later, Sanchez reportedly wrestled the shotgun away from his son. At that time, the victim was on the phone with County Dispatch and told Sanchez she was calling the police and informing them of his intention.

Sanchez then allegedly punched the victim on the left side of her face and took the phone from her. County Dispatch records show Sanchez answered the phone on a callback and said everything was OK. The dispatcher noted Sanchez sounded erratic on the phone. Shortly afterward, Dispatch received another call from the victim, who said she had been assaulted. The victim and son then left the residence.

During interrogation, Sanchez allegedly admitted grabbing his son and taking the shotgun from him and accidentally hitting his wife. He told officers that he only wanted to use the shotgun on himself and wouldn’t have used it on family members or police.