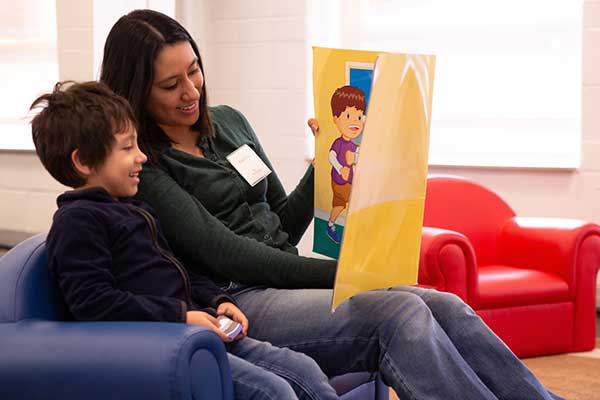 Science has consistently shown that the first three years of life are vital to a child’s developing brain, and new research confirms that families play an important role in language development and educational readiness.

“We’ve seen first-hand in our research what a positive impact parents can have in the process,” says Dr. Dana Suskind, professor of surgery and co-director of the TMW Center for Early Learning + Public Health at the University of Chicago.

Preliminary results from a five-year study, supported through a $3 million grant by the PNC Foundation and conducted by the TMW Center, reveal that parents improved their toddler’s language environments by increasing conversational turns almost four times more than parents in the control group. These findings are particularly meaningful because they mirror new and emerging research that points to the importance of conversational turn-taking in building a child’s language and cognitive skills.

These results are generating attention and investment in programs like “Any Time is 3Ts Time,” a campaign launched by the TMW Center that’s designed to empower parents with the knowledge and skills needed to make the most of everyday interactions with their young children.

The campaign, which is supported by an additional $3.3 million grant from the PNC Foundation, is built on the “3Ts” — Tune In, Talk More and Take Turns — and includes the distribution of online and print materials to parents through a network of community partners, particularly in underserved neighborhoods. The free, easy-to-use resources at the3Ts.org will become available in both English and Spanish in early 2020 and eventually include access to an interactive web-based app.

The grant, which is supported through PNC Grow Up Great, a bilingual $500 million, multi-year initiative helping prepare children from birth to age 5 for success in school and life, also will support the TMW Center’s “Let’s Talk!” parent group program, which is designed for deeper 3Ts engagement and includes real-time coaching and in-person sessions. The group program will debut in Chicago and later extend to early education programs in other U.S. cities.

“We recognized an opportunity to develop high-quality, early educational resources for families with children under age three. Now, with proven research from the TMW Center, we are able to support their effort to make new resources accessible to millions of parents and caregivers across the country,” says Sally McCrady, chair and president at the PNC Foundation.

Access to high-quality early education and resources is critical for a child’s success in school and life. Thanks to new programs based on scientific research, more children are going to start school ready to thrive and learn.