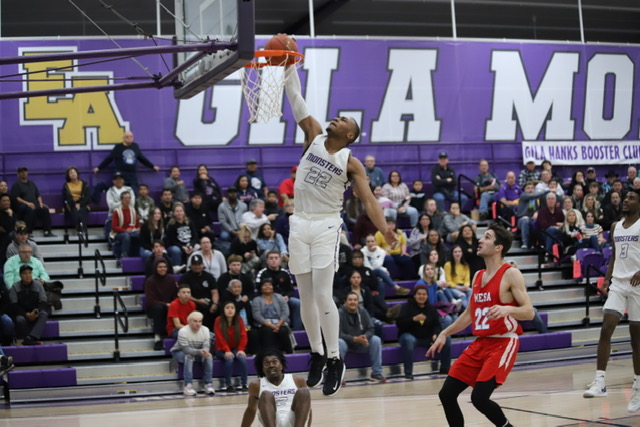 THATCHER — The Eastern Arizona College Men’s Hoops squad battled back from a 13 point first half deficit to pick up a big win 70-66 and move into first place in the ACCAC.

“We really turned up the heat on defense in the second half,” said EAC Head Coach Maurice Leitzke.

That might be the under statement. The Gila Monsters forced 16 Mesa turnovers in the second half that led to numerous fast break layups to help EAC tie the game with 8 minutes to play. They would never trail again.

“Mesa wants to slow the game down,” said Leitzke. “We needed to speed the game up and our defensive effort led to more offense.”

The Monsters were led in scoring by Nate Pollard with 24 points and 10 rebounds. He was also named the ACCAC D1 player of the week for the 4th time this season after the game. Anthony Anderson added 19 as well.

EAC moves to 14-2 overall and 6-2 in the ACCAC. They will be in action again Saturday on the road at Tohono O’Odham Community College at 7:30pm. The Jegos defeated Scottsdale in triple overtime last night.

You can hear Saturday’s game on KATO 1230 AM in the Gila Valley or online by clicking here.