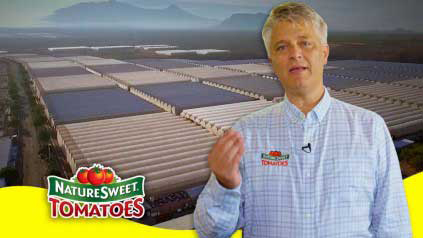 BONITA — While the future of its Bonita operation is in limbo, pending two court cases over the legality of a referendum opposing rezoning of two greenhouse complexes, NatureSweet announced it is continuing to grow.

The company announced Tuesday expansion of its Mexican operations through a joint venture with  high-tech greenhouse grower Ganfer.

“With this joint venture, we believe that NatureSweet will become the largest vertical-integrated greenhouse (operation) in North America,” NatureSweet CEO Rodolfo Spielman said in video announcement.

The move adds about 200 acres of greenhouse operations to NatureSweet’s existing 1,200 acres, with another 150 acres expected to be added before the end of 2022.

The result, Spielman said, should be an increase in sales of about 20 percent.

“We are very excited to start this joint venture with NatureSweet. This is beyond just growing superior products, but it’s also about a vision to leverage higher technology to accelerate and maximize our positive impact in our communities and the planet,” said German Gándara, president and CEO of Ganfer.