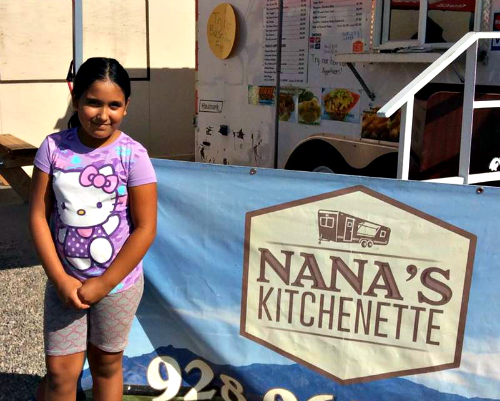 THATCHER – If your dining party can’t choose between a hamburger or a burrito, there’s only one place to go for good food on the run in Thatcher.

Nana’s Kitchenette food trailer, located beside the Station Laundromat at 3627 W. Main St. in Thatcher, is ready tantalize any foodie’s taste buds. Victor Dominguez, owner and operator of the trailer, named his business after his nickname for his daughter, Erica. Dominguez has worked in the food industry for more than a decade and got his start working at Jerry’s restaurant in 1997. He said he loves everything to do with the restaurant business.

“I’ve been cooking for over 15 years now,” Dominguez said. “Running a kitchen trailer is different than running a full operation of a restaurant. You don’t have the extra overhead that you have in a restaurant.”

The kitchenette has been in existence since the beginning of the year. Dominguez started the business with the trailer located at the Mt. Graham Municipal Golf Course. It stayed at the course for six months and now is located in Thatcher.

“The best part (about) the business is that I do what I love to do,” Dominguez said. “I cook with my heart.”

Nana’s menu has a large variety, including an array of breakfast omelettes, but what it is known for throughout the Gila Valley is its mouth-watering hamburgers. The burgers also come in a wide variety, including a BBQ western burger, avocado bacon burger and garlic mushroom Swiss burger.

If a burger isn’t to your liking, the menu also boasts a variety of sandwich melts and an assortment of appetizers and side dishes, such as bacon cheesy fries, jalapeno cheese bites, onion rings and hot wings.

Look for Nana’s Facebook page by searching for Nana’s Kitchenette, and for more information or to put in an order, call Dominguez at 928-965-8627.

According to a 2015 statistic, there are more than 4,000 food trucks in the United States. Some restaurant owners might mumble at the abundance of food trucks, however, with roughly 616,000 restaurants, the brick and mortar eateries outnumber the trucks substantially. Nevertheless, the food truck industry has risen 12.4 percent over the past five years.