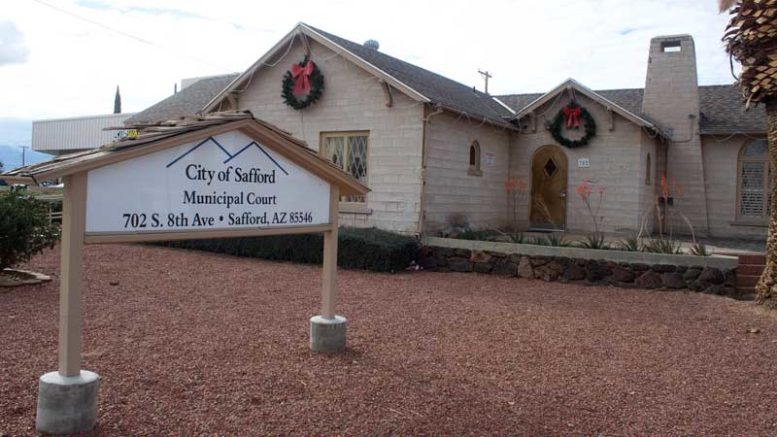 SAFFORD – With the three municipalities of Safford, Thatcher, and Pima so close to each other, consolidating on certain things to save on costs has much been talked about but rarely implemented. Come February, however, the trio will come join together for one municipal court instead of operating three separate ones.

With Safford Magistrate D. Corey Sanders (who also currently serves as the Graham County Superior Court Pro Tem) retiring at the end of January along with Assistant Magistrate Linda Rosales, Safford City Manager Horatio Skeete had a problem; Safford had the facility but it would have to find a new magistrate. Over in Thatcher, the town has a magistrate, but no dedicated facility that is up to the latest required standards for a magistrate court. That’s when Skeete began to think outside of the box and inquired with Thatcher Town Manager Terry Hinton if the two municipalities couldn’t join forces to save on costs. They then decided to reach out to Pima as well.

After examining the benefits of the plan, Pima Town Manager Sean Lewis said he was all on board. Lewis told Gila Valley Central that the town will save approximately $40,000 per year by joining the group. However, that means that anyone charged with a misdemeanor by the Pima Police will have to drive to Safford for court. Lewis said most of those cases actually involve people who aren’t residents of the town and are merely passing through on the highway anyway, and residents are used to driving to Safford on a daily basis for work and shopping.

At its Dec. 11 meeting, the Safford City Council unanimously approved an intergovernmental agreement with Thatcher and Pima to join the various courts together as one. The consolidated court will be held at Safford’s facility at 702 S. 8th Ave., which the city converted from law offices after purchasing the building from Irval Mortensen. Thatcher Magistrate Ned Rhodes will preside over the court, and the two secretaries from Safford will become Thatcher employees. The new court will become the Gila Valley Consolidated Community Court.

According to the IGA, Safford will be responsible for the upkeep of the building while Thatcher will provide all staffing to operate it. Each municipality will provide their own prosecutor and pay for court-appointed defense attorneys. Thatcher will pay for all other expenses for the operation of the court and will bill Safford and Pima for each municipality’s share of the operating costs based on each’s court activities. Thatcher will also be responsible for processing all required paperwork and will make quarterly payments to Safford and Pima for all fines collected on behalf of either municipality, which will now be on a common fee schedule.

Skeete told the council that by consolidating Safford would save “somewhere in the vicinity of $100,000 or so.”

Safford Mayor Jason Kouts said the IGA appeared to be beneficial to all parties involved and that it was good to see the various municipalities work together for a common good.

“Three communities can work together and come away with one,” Kouts said. “I think its a win-win for everybody.”