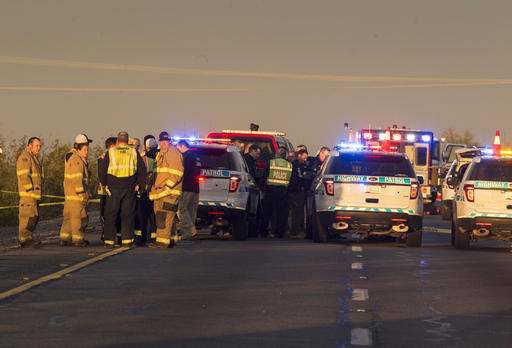 Emergency personnel gather at the scene where an Arizona Department of Public Safety trooper was shot, Thursday, Jan. 12, 2017, at the scene of a rollover accident on Interstate 10 near Tonopah, Ariz. An Arizona state trooper stopped to help at a car wreck along the remote highway Thursday when he was shot and wounded in an ambush by a man who was bashing the officer's head against the pavement until a passing driver shot him to death, authorities said. The trooper suffered a severe wound to his shoulder and upper chest but he is expected to recover at a hospital. (Mark Henle/The Arizona Republic via AP)

PHOENIX (AP) — An Arizona man who helped a wounded state trooper said Friday he was afraid and confused when he saw three bodies and pulled over on a freeway.

Authorities say another motorist had just shot and killed a man who wounded Trooper Edward Andersson early Thursday on Interstate 10 west of Phoenix.

Brian Schober, a 44-year-old systems engineer, told The Associated Press that he saw the trooper’s vehicle parked in a traffic lane marked with flares when he first came upon the nighttime scene.

He said he didn’t think twice about stopping when the motorist who had shot the attacker flagged him down.

“It looks wrong with a civilian flagging down a car when there’s an officer there — something’s wrong,” Schober said, recalling his reaction. “But what can I do? There’s no time to think.”

The former volunteer emergency medical technician said both wounded men were on the pavement along with a woman who authorities say was fatally injured after being ejected from the attacker’s vehicle when it rolled over earlier.

Schober said he used Andersson’s radio to summon help and began using the first-aid kit from Andersson’s vehicle to begin cleaning blood from the trooper’s head.

Emergency personnel soon arrived and determined that Andersson had been shot in the chest and a shoulder.

State Department of Public Safety officials said the attacker had been on top of Andersson and was pounding the trooper’s head on the pavement before the other motorist shot the attacker.

Schober had nothing but praise for the motorist who shot the attacker, calling him “good Sam” — short for good Samaritan.

“The officer would have been dead had the good Sam not arrived and not fired,” Schober said.

Arizona and virtually all states have a “defense of third person” law that allows someone to use deadly force against another who is threatening or injuring a third person.

Eugene Volokh, a law professor at UCLA, said such laws are akin to self-defense statutes. The laws have been around for centuries.

“When somebody wants to help, it surely makes sense that the law would allow him to help and that is in fact what the law allows him to do,” Volokh said.

DPS officials said Andersson was ambushed while putting out flares after coming across the roll-over scene and checking on a report of shots being fired at another vehicle.

Authorities were still conducting interviews to piece together what happened.

“The two people that know ‘why’ passed away,” said Capt. Damon Cecil, a DPS spokesman, referring to the attacker and the woman in his vehicle.

There’s no video of the attack because neither Andersson nor his vehicle had a camera, Cecil said.

The identities of the dead woman and the attacker were not released pending notification of relatives. The identity of the motorist who shot the attacker was withheld at his request, authorities said.