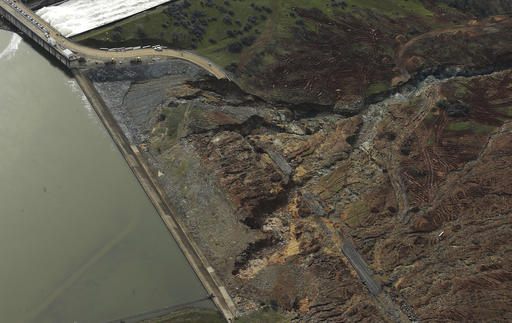 OROVILLE, Calif. (AP) — Nearly 200,000 people who were ordered to leave their homes out of fear that a spillway could collapse may not be able to return until the barrier at the nation’s tallest dam is repaired, a sheriff said Monday.

Butte County Sheriff Kory Honea did not say how long the fixes could take and offered no timetable for lifting the evacuation order. Officials from the California Department of Water Resources were considering using helicopters to drop loads of rock on the eroded spillway at Lake Oroville, about 150 miles northeast of San Francisco.

Meanwhile, the water level behind the dam dropped, easing slightly the fears of a catastrophic spillway collapse. But with more rain expected later in the week, time was running short to fix the damage ahead of the storms. 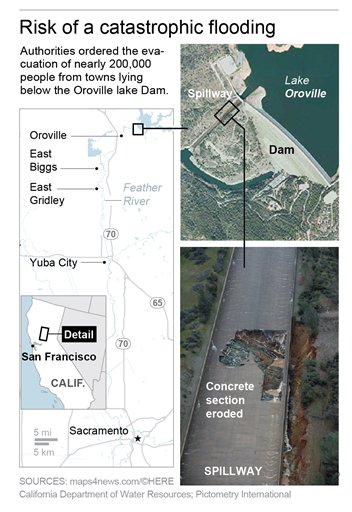 Authorities ordered evacuations Sunday for everyone living below the lake out of concern that the spillway could fail.

Authorities ordered mass evacuations Sunday for everyone living below the lake out of concern that the spillway could fail and send a 30-foot wall of water roaring downstream.

Nancy Borsdorf described a scene of chaos on her way out, including drivers abandoning cars as they ran out of gas.

“People were just panicking,” said Borsdorf, who was at a shelter Monday in Chico.

Asked if the spillway was supposed to handle far more water, the acting head of California’s water agency said he was “not sure anything went wrong” on the damaged spillway.

Bill Croyle said sometimes low-flow water can be high energy and cause more damage than expected. His comments came after officials assured residents for days that the damage was nothing to be concerned, then ordered everyone to get out in an hour.

The water level in the lake rose significantly in recent weeks after storms dumped rain and snow across California, particularly in northern parts of the state. The high water forced the use of the dam’s emergency spillway, or overflow, for the first time in the dam’s nearly 50-year history on Saturday.

The threat appeared to ease somewhat Monday as the water level fell. Officials said water was flowing out of the lake at nearly twice the rate as water flowing into it. 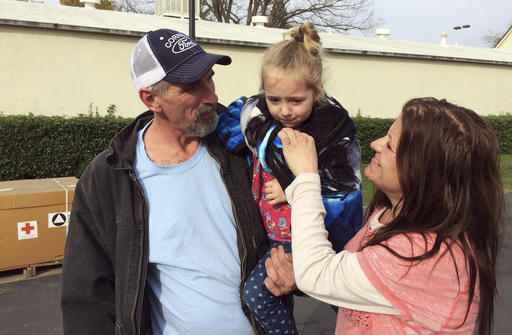 Oroville, Calif., resident Patrick Cumings, left, holds his daughter, Elizabeth, and he stands with his wife, Elizabeth Cumings at the Red Cross evacuation center in Chico, Calif., Monday, Feb. 13, 2017. The water level has dropped behind the Oroville Dam, nation’s tallest dam, in Oroville reducing the risk of a catastrophic spillway collapse and easing fears that prompted the evacuation of the Cumings and others downstream. (AP Photo/Don Thompson)

Sunday afternoon’s evacuation order came after engineers spotted a hole in the earthen secondary spillway for the 770-foot-tall Oroville Dam and told authorities that it could fail within the hour.

With more rain expected Wednesday and Thursday, officials were rushing to try to fix the damage and hoping to reduce the dam’s water level by 50 feet ahead of the storms.

The sudden evacuation panicked residents, who scrambled to get their belongings into cars and then grew angry as they sat in bumper-to-bumper traffic hours after the order was given.

Raj Gill, managing a Shell station where anxious motorists got gas and snacks, said his boss told him to close the station and flee himself. But he stayed open to feed a steady line of customers.

“You can’t even move,” he said. “I’m trying to get out of here too. I’m worried about the flooding. I’ve seen the pictures — that’s a lot of water.”

A Red Cross spokeswoman said more than 500 people showed up at an evacuation center in Chico, California.

The shelter ran out of blankets and cots, and a tractor-trailer with 1,000 more cots was stuck in the gridlock of traffic fleeing the potential flooding Sunday night, Red Cross shelter manager Pam Deditch said.

At least 250 California law enforcement officers were posted near the dam and along evacuation routes to manage the exodus and ensure evacuated towns do not become targets for looting or other criminal activity.

About 188,000 residents of Yuba, Sutter and Butte counties were ordered to evacuate. 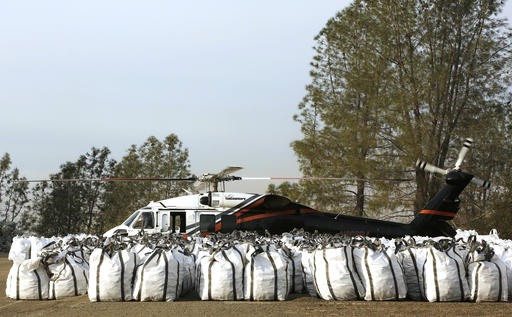 A helicopter sits at a staging area behind bags of rocks near the Oroville Dam, Monday, Feb. 13, 2017, in Oroville, Calif. Officials from the California Department of Water Resources were considering using helicopters to drop loads of rock on the eroded spillway at Lake Oroville. (AP Photo/Rich Pedroncelli)

The erosion at the head of the emergency spillway threatens to undermine the concrete weir and allow large, uncontrolled releases of water from Lake Oroville. Those flows could overwhelm the Feather River and other downstream waterways and levees and flood towns in three counties.

The sudden decision Sunday to evacuate tens of thousands of people was a departure from earlier assurances, when officials had stressed the Oroville Dam itself was structurally sound.

Officials are most concerned about the dam’s emergency, earthen spillway that began taking on water after water was diverted from the main concrete spillway because of the damage.

Engineers do not know what caused the cave-in. Chris Orrock, a Department of Water Resources spokesman, said it appears the dam’s main spillway has stopped crumbling even though it is being used for water releases.

The lake is a central piece of California’s government-run water delivery network, supplying water for the state’s Central Valley agricultural heartland and homes and businesses in Southern California.