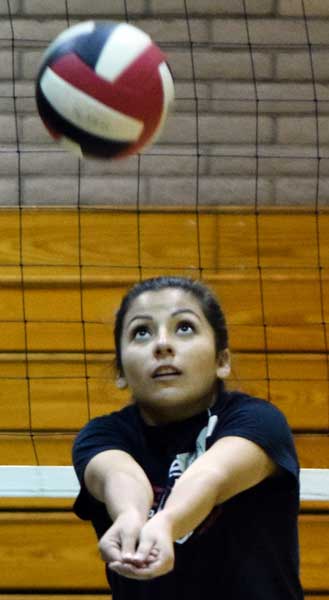 The advantage was obvious.

“If we went somewhere else for a camp, we could only take 12 at the most because of transportation and housing,” second-year MHS head coach Rhyanna Mennen said. “This way, we were able to involve more students.”

“We learned a lot, were able to reach younger girls and get them some early training. The information and drills were presented to their skill level. It was a refresher for the older players . . . There were major improvements from day one to day four. The confidence level was higher and the older girls were more aggressive.”

Senior Audrey Castillo said the camp was “different, I learned a lot.”

“I hope this (camp) is not the peak of your volleyball career,” head instructor Kyle Chapman said in his closing remarks to the campers. “You have a good foundation. Every rep is a chance to improve your skills, to build on what you’ve learned.”

The Phoenix area resident said the biggest reward he gets from doing the camps is watching the improvement from the first day to the last. The Morenci-held camp was his fifth this summer with nine more scheduled for him, mostly in the same time zone. In prior years, he has been all over the country.

Joining Chapman on the national instructional staff were California residents Jasmine White and Joe Mayer. Each of the instructors had collegiate experience in the sport, either as a player or as part of a coaching staff.

The final hour of the last day had the campers paired against each other in a last man standing format, then against the coaches, to showcase their newly learned skills.