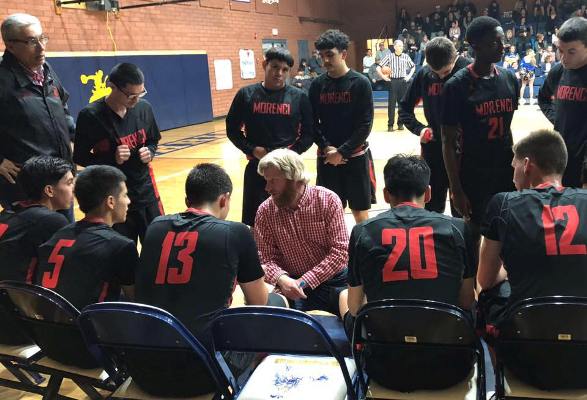 Morenci Head Coach Patrick Hepper addresses his team during a timeout. He will end his career with an 84-54 record.

For the first time since the Arizona Interscholastic Association started using PowerPoints to rank teams, the Morenci Boys Hoops squad is ranked #1.

Head Coach Patrick Hepper, in his 5th season, has compiled a career record of 78-51 as of January 21st.

“It’s extremely gratifying to be here right now. I’m happy for the team, community, the school, everyone that has been a part of it. We have a long ways to go to accomplish our bigger goals of winning a conference championship and competing for a state championship,” said Hepper. I don’t think a lot of people would ever believe Morenci would be ranked #1 in basketball at any point, but it’s all the work we put in and the vision the athletic department and coaching staff has had since day one.”

Morenci finishes the season with games at Bisbee, home vs #5 Thatcher, home vs Cobre NM, at Benson and home against Tombstone. The target is squarely on the backs of the Wildcats for the first time this season. Can they turn their Copper roots into a Gold Ball? Only time will tell.