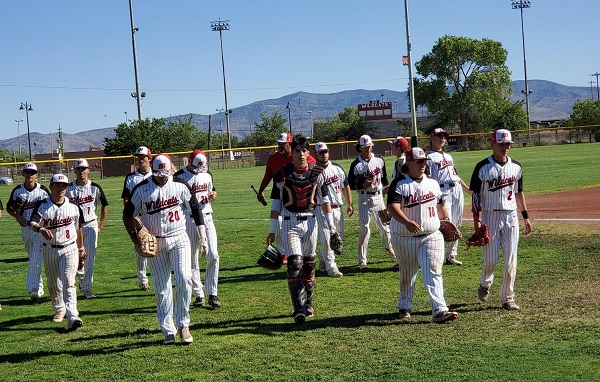 Morenci Baseball beat Pima 11-1 to advance to the 2A State Tournament. Photo by Lee Patterson

The Morenci High School baseball team has had a Cinderella type run to Monday night’s 2A State Championship game. They finished 4th in the 2A East and had to win a play-in game just to get into the tournament, then when the bracket was revealed they were a #10 seed with a tough road ahead of them. Fast forward a month and add in back to back one run wins and low and behold the Morenci Wildcats are in the title game for the first time since 1986.

In ’86 the Wildcats captured the 2A Title with a 4-3 over Willcox. That was the last time the ‘Cats have been to the title round. In 1998 and 2006 they made the semi-finals but came up short. As the 10 seed, the Wildcats will be the only double digit seed to reach the 2A State Championship game since the AIA started using power points in 2010.

Morenci will face the top seed Scottsdale Christian at 7pm May 13th at Tempe Diablo Stadium. SCA has been dominate in the playoffs, the Eagles have won their 3 games by the combined score of 34-0. SCA is coached by 14 year MLB veteran Tim Salmon. Coincidentally Salmon, who played for the California/LA Angels, played his Cactus League games at Tempe Diablo. Non the less the Eagles are rolling and will be a big challenge for the Wildcats.

Morenci Head Coach Joseph Morse was excited to be in the title game when he spoke with GilaValleyCentral by phone Monday morning. “These guys(SCA) have been on a roll but I think we played in a better conference and saw some of the best pitching in the State all season long,” said Morse. “Our first goal is score the first run against them this year in the playoffs by putting some pressure of them defensively.”

Morenci fans who remember the 1986 title team will also remember that Top Gun was the blockbuster movie of the year and the Chicago Bears “shuffled” their way to a Super Bowl win.

It’s not quite David vs Goliath but it might be close. Morenci does have history on their side however. The ’86 State Championship was played at Tempe Diablo Stadium. Will history repeat itself?