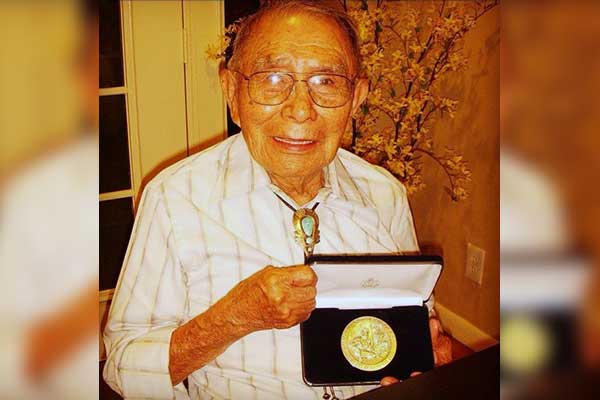 One of the last living Navajo Code Talkers from World War II has died. According to a statement from Navajo Nation President, Jonathan Nez and Vice President, Myron Lizer, Fleming Begaye, Sr. passed away Friday in Chinle. He was 97.

“The Navajo Nation has lost another brave and selfless Diné warrior, who sacrificed more than we’ll ever know to defend our country,” said President Nez. “We offer our heartfelt appreciation to the family for sharing his life with us. May the Creator bless you and your family with strength and comfort.”

Navajo Code Talker Begaye is Tódích’íi’nii (Bitter Water Clan) and born for Kinłichii’nii (Red House People Clan). He was born on Aug. 26, 1921 in the community of Red Valley, Arizona and resided in Chinle, Arizona at the time of his passing. He had three children with his late wife, Helen M. Begaye, who passed away in 2008.

Begaye served as a Navajo Code Talker in the Marine Corps from 1943 to 1945 and fought in the Battle of Tarawa and the Batter of Tinian and spent one year in a naval hospital as a result of injuries and wounds he received during his service.

Following his military service, Begaye returned to the Navajo Nation where he owned and operated “Begaye’s Corner” trading post in the community of Chinle, where he also lived with his wife and children.

In 2017, Begaye was among a group of Navajo veterans honored by President Trump at the White House. “From the heart, from the absolute heart, we appreciate what you’ve done, how you’ve done it, the bravery that you displayed, and the love that you have for your country,” Trump said about the Code Talkers.

Speaking that day, Peter MacDonald, president of a group of the last surviving Navajo Code Talkers, recalled Begaye’s heroism at the battle of Tarawa.

“His landing craft was blown up and he literally had to swim to the beach to survive,” MacDonald said. At Tinian, MacDonald said, Begaye “got shot up real badly, survived one year in naval hospital.”

“With the passing of Mr. Begaye, Arizona has lost an American hero,” said Governor Ducey. “Mr. Begaye joined the over 430 Code Talkers who stepped up to serve our nation in its time of need during World War II. By using their native language, the Code Talkers formed an unbreakable code that was decisive in helping the Allied Forces claim victory. Today, Arizona celebrates the life of Mr. Begaye, and we express our gratitude for his service and sacrifice in defense of freedom. We express our deepest sympathies to Mr. Begaye’s family, friends and the entire Navajo Nation.”