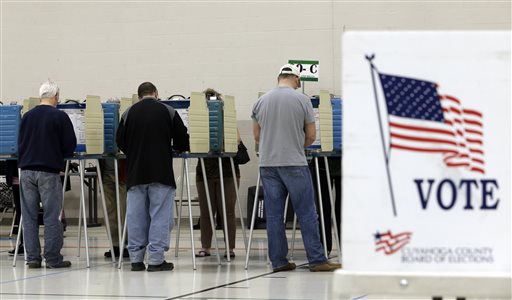 Voters cast their vote at the athletic wing of Orange High School Tuesday, Nov. 3, 2015, in Moreland Hills, Ohio. Election officials in two of Ohio's counties say lines of voters dwindled some after an early wave of Ohioans who cast their ballots early in the state's general election. (AP Photo/Tony Dejak)

COLUMBUS, Ohio (AP) — Ohio voters have rejected a ballot measure seeking to legalize recreational and medical marijuana use in the state.

Failure of the proposed constitutional amendment follows an expensive campaign, a legal fight over its ballot wording and an investigation into the proposal’s petition signatures.

The measure known as Issue 3 on Tuesday’s ballot would have allowed adults 21 and older to use, purchase or grow certain amounts of marijuana. The constitutional amendment would have established a regulatory and taxation scheme while creating a network of 10 growing facilities.

Those growing sites also were targeted in a separate ballot question aimed at preventing monopolies from being inserted into Ohio’s constitution for the economic benefits of a few.