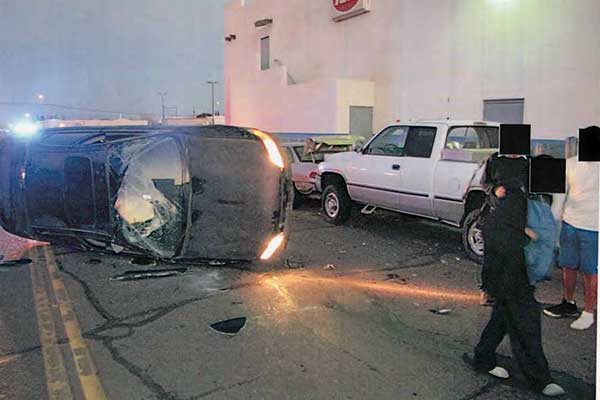 Safford police responded to a traffic accident on Tuesday, March 19, 2019 at approximately 6:00 a.m. The accident involved three vehicles and occurred in the 300 block of 8th Street in Safford. When police arrived they found a Honda sedan on its side in the road and damage to two other vehicles that were properly parked on the north side of the street.

The driver and passenger of the Honda were sitting on the curb when authorities arrived. The driver told police that she was traveling west on 8th street at approximately 20 to 25 MPH. She was not wearing a seat belt. She said that she had no idea what happened to cause the accident.

Based on statements and physical damage to the vehicles, authorities concluded that the driver collided with the left rear side of the white pickup, which pushed the truck 10 feet forward into a brown Ford Taurus. During the collision the Honda rolled onto its side.

The owner of the Ford Taurus said she had just parked her vehicle when the collision occurred. There were no serious injuries reported.

According to the police report, the driver of the Honda had constricted pupils, mumbled speech and a low raspy voice. She apparently admitted to using heroin and marijuana with the previous 24 hours. The driver was taken to the Safford police station where a blood sample was taken and she was released.