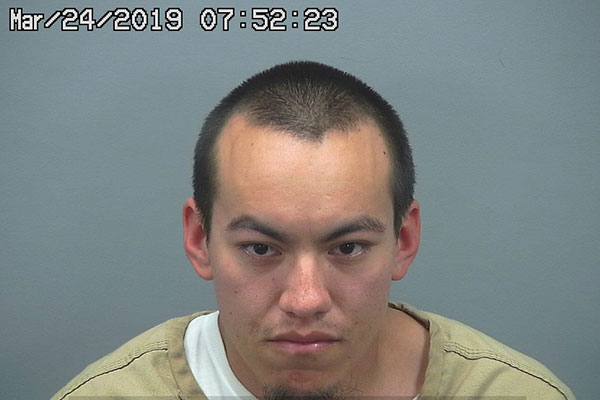 Safford – A man woke up at approximately 1:45 a.m. Sunday morning to find an unknown intruder in his room. The victim was awakened by the intruder lighting a cigarette lighter. The man told authorities that he had never seen the intruder before, but he calmly escorted the man to the front door of the residence. The intruder, later identified as Johnny Casas, Jr had left a back and some other items inside the residence, so the homeowner collected them and escorted the man outside the home and told him not to come back. Casas apparently told the homeowner that he was looking for his girlfriend.

The homeowner woke up his roommate and told him what had happened. The two men were sitting on the couch in the living room when Casas returned and started banging on the front door. Casas Kicked the front door in and came inside the residence, yelling loudly about a black book.

The homeowner told authorities that he didn’t lay a hand on the intruder but kept him calm while his roommate called authorities. Both men said that they had never seen Casas before. They expressed concern over the safety of a seven-year-old child who was still asleep in his bedroom.

When authorities arrived, they were met by the roommate who told them they would find the intruder at the front door. They approached Casas, who was standing inside an open door at the front of the residence and placed him in handcuffs. When they asked for his name, Casas gave them the name of Christopher Ray. He told authorities that he did not know the people who lived at the residence. He said he had come looking for his girl.

Deputies identified Casas through an Arizona identification card he had in his wallet. When asked why he originally gave them the name of Christopher Ray, Casas said that he felt that it was his real name because he is doing ‘god’s work.’

Casas admitted that he broke down the door. According to the police report he admitted to using meth and marijuana.

Casas was booked into the Graham County jail on charges of criminal trespassing criminal damage. While the deputy was completing the booking forms, Casas reportedly stood up in front of the door that led to the secure outer door and started to run. The deputy yelled at him to stop and told him to sit back down. Casas stopped and returned to his seat. He was booked without further incident.