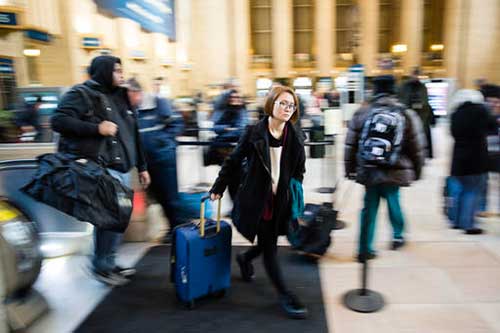 CHICAGO (AP) — When Mary Mitchell gathers with family for Thanksgiving, she plans to enjoy cooking with her sister, a satisfying meal and maybe a game of charades afterward. One thing that’s not on the list: politics.

“It’s kind of a sacred time for family to be together, be thankful and enjoy a holiday,” Mitchell said Monday as she waited for a flight from New Orleans to her home in Chicago. “I really don’t think … that the political arena should be given that much power to come into your home at that time when it’s really special family time.”

Almost 49 million people are expected to travel 50 miles or more for the holiday, the most since 2007, according to AAA. Many are hoping to take a break from the rancor and division of the election between Republican Donald Trump and Democrat Hillary Clinton and instead focus on what unites them: family and tradition.

Kevin Baumann, a 47-year-old boilermaker from Spokane, Washington, belongs to a union whose members are expected to vote Democratic and is accustomed to talking politics at family gatherings, where things can get heated. But Baumann said he has no plans to bring up the subject Thursday at his parents’ house, an annual event he missed the last two years because of work.

“We’ll avoid it,” said Baumann, as he stopped in central Montana with his 27-year-old son on his way home to Washington after working on a coal plant in Iowa. “We’ve got bigger things to talk about during the holidays.”

Some people dread a family showdown so much that they’re opting to stay home, said Heather McCutcheon, 48, a Chicago massage therapist and practitioner of Reiki, a method of reducing stress through touch.

“They are anticipating at best that it will be awkward and uncomfortable; at worst, a conflict,” McCutcheon said.

She said she’s seen Facebook posts issuing open Thanksgiving invitations for those who don’t want to go home. Another friend plans to celebrate with family but is getting a hotel room to avoid her mother’s gloating over Trump’s win.

Trump voter Stephanie Keller of Picayune, Mississippi, agrees that people should focus on coming together this Thanksgiving — to support the president-elect.

“I hope that people calm down and realize that a decision has been made by obviously a majority of the United States and that we can just come together and support him the way that we’re supposed to,” said Keller, who was at the New Orleans airport on her way to Boston to visit a friend.

“My sister-in-law is a big Trump supporter, and she and I have gone back and forth for this entire election,” said Arlene Anjos of Roselle Park, New Jersey, who voted for Clinton. “It got to the point where we were having a conversation about Thanksgiving and … one of the agreements was that we’re not going to talk about politics anymore.”

“That is off-limits for this Thanksgiving dinner,” she said.