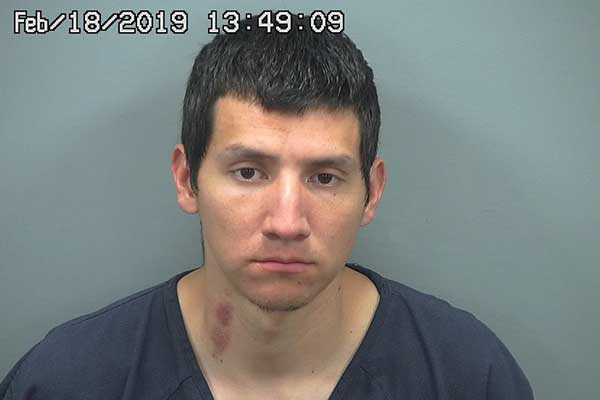 A Safford police officer on patrol in the area of 11th Street and 7th Avenue in Safford saw a man walking down the street that he knew had a felony warrant for his arrest. It was just after 11:00 a.m. on February 18th when the officer spotted Jacob Rios walking down the street. In addition to the warrant, Rios was also wanted for questioning and possible charges for Robbery and Aggravated Assault in an incident that had occurred on February 11, 2019.

The officer stopped to contact Rios but when he saw the officer he took off running  on foot. The officer radioed to other units that Rios was fleeing on foot. Rios led police on a chase that took them through the Safford Middle School and into residential back yards. The officer pursued Rios on foot, but did not enter the back yard because of an aggressive dog that nearly bit Rios as he ran through the yard.

The pursuing officer radioed his current location and the direction the suspect was running. Another officer found Rios coming out of a driveway on the 1100 block of 7th Avenue and ordered him to the ground. Rios did not comply and was taken to the ground by two Safford police officers. Once the warrant was confirmed, Rios was searched. Authorities found a used hypodermic needle in his pocket. When asked why he ran when contacted by the officer, Rios said that he did not want to go back to prison.

Seven days earlier, Safford police were called to a residence to investigate a report of domestic violence involving Rios. The homeowner told authorities that Rios had left the residence prior to their arrival. The victim told police that she and Rios are no longer together but have children in common. She had gone to the residence so Rios could see his child before she continued with errands. Rios came out of the house and got into the passenger seat of the victim’s car. The woman described Rios as a ‘heavy drug user,’ and that he was likely going through withdrawals during their encounter because he was ‘shaky and jittery.’

Rios apparently became agitated and accused the victim of cheating. He then struck her in the eye with a closed fist, causing her to start bleeding. The woman reportedly grabbed her eye and slumped over as Rios reached across her and grabbed her wallet from the door pocket. Rios allegedly removed $40.00 from her wallet and fled the scene. The woman was taken to the Emergency Room where she was treated for a gash under her right eye that required stitches.