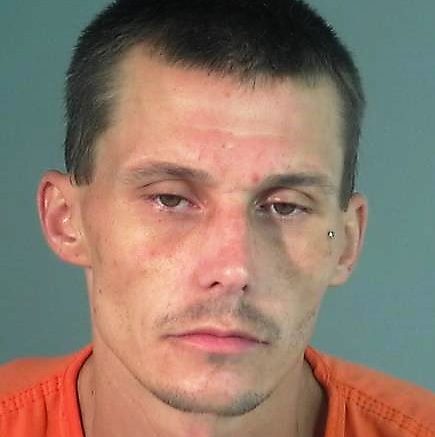 Contributed Photo/Courtesy GCSO: Walter Robideau was booked into jail on warrants after being found asleep in a car at a gas pump.

SAFFORD – The idiom “asleep at the wheel” describes someone in authority who has neglected some aspect of his or her role. For a man found unconscious at the gas pumps Monday, July 11, the idiom appears to be both figurative and literal.

Authorities were dispatched to the Giant gas station at 750 S. 8th Ave. at about 11:51 a.m. regarding a welfare check on a couple in a white car. Upon arrival, a Graham County Sheriff’s Office deputy observed the car’s door was ajar and a man and woman appeared to be sleeping in the front seats.

After waking the occupants, the deputy asked the driver, identified as Walter Jeffery Robideau, 31, of Pima, why they were sleeping at the gas pumps. Robideau allegedly said they had just arrived in town from Tucson and no further explanation was noted in the deputy’s report.

A warrants check came back positive for Robideau with a warrant out of Pima Municipal Court for a probation violation stemming from an original charge of possession of drug paraphernalia and another warrant out of Safford Justice Court for failure to appear on a shoplifting charge.

Robideau was taken into custody on the warrants, but the deputy reported he showed no signs of impairment and no illegal items were located in his possession or in the car. However, since his girlfriend did not have a license, the car was removed from the scene by Nuttall’s Towing.

Robideau was then transported to the Graham County Jail, where he was booked on his warrant. His girlfriend took some items out of the car and left the area.