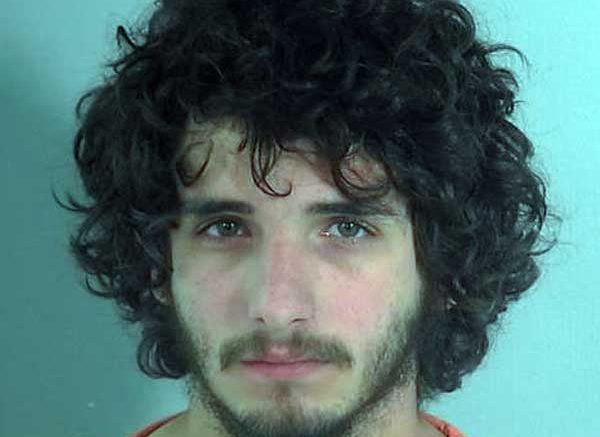 Contributed Photo/Courtesy GCSO: Amadeo Hart was booked into the Graham County Jail on Christmas for disorderly conduct and criminal damage.

SAFFORD – Alcohol was likely a key component in turning a Safford man into a grinch this Christmas; aiding his decision to kick his girlfriend and their toddler son out into the cold.

The authorities weren’t having any of that, however, and arrested the man, Amadeo Hart, 22, after he admitted to breaking his child’s toy.

Officers were dispatched to an apartment in the 1100 block of 5th Avenue at about 11:14 p.m. Christmas Day regarding a domestic dispute.

Upon arrival, the female victim said she arrived at her residence with her son at about 8 p.m. and encountered Hart, who had been drinking alcohol throughout the day. She said Hart informed her he wanted to be left alone and was upset at their arrival. She also added that Hart has anger issues when he drinks and that he quickly became upset for no apparent reason.

The victim said Hart insisted they leave, so she grabbed her son and rushed out the door without retrieving any of their belongings. Hart allegedly pursued them to the door and punched it in anger. The officer noted there were two fist-sized holes on the interior of the door, a broken picture frame, an expletive written in marker on a mirror and a broken toy riding cart.

A marijuana bong with residue was also located in the residence during the police interaction and both Hart and the victim claimed it belonged to the other person. The bong was confiscated and destroyed by Safford officers.

Hart allegedly told an officer that he wanted his girlfriend and son to leave because he wanted to be alone. The officer noted a significant odor of alcohol emanating from Hart’s breath while speaking. The officer reported it appeared that Hart didn’t have any concern for the victim or their son’s well-being. According to the National Weather Service, the temperature in Safford during the incident was 33 degrees and reached a low of 29 degrees early the next morning.

Hart said while the apartment was in his girlfriend’s name that “I pay everything here,” and that he wanted to them out. Hart also allegedly admitted to breaking his son’s toy in anger during the incident.