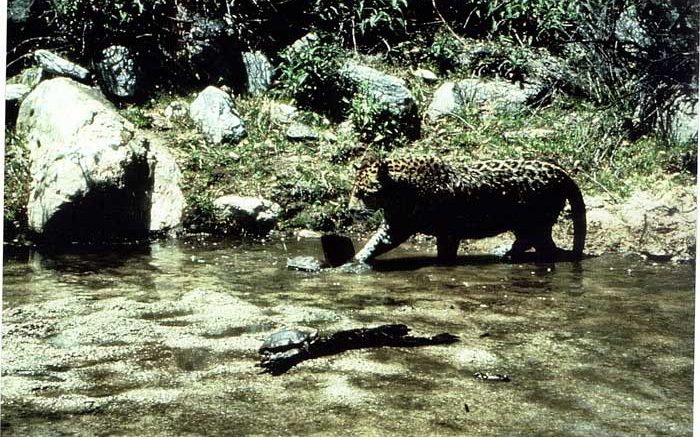 Contributed Photo/Courtesy John Phelps: Recovering jaguars like this one in the United States is impossible with no native breeding population.

The U.S. Fish and Wildlife Service (USFWS) finally took the plunge. Once jaguars in the United States were listed under the Endangered Species Act (ESA) and six separate sites in Arizona and New Mexico were declared “critical habitat”, a recovery program was mandated by federal law.

The main problem, of course, is that we have no viable breeding population of the big spotted cats. Lone male travelers from the nearest real jaguar residency 130 miles south in Mexico occasionally go for a walk-about or vacation north of the border but such wanderers would be impossible to “recover”. Still, the Wildlife Service had to do something or face more litigation from both the Center for Biological Diversity (CBD) and Defenders of Wildlife.

What they did was present a 508 page tome on an unsuspecting public, calling it the draft jaguar recovery plan put together with the help of a “technical subgroup of the jaguar recovery team”. It is an unwieldy, repetitious, mishmash of data, acronyms and appendices longer than the actual plan itself. But it does have lots of pretty colored maps. And, by the way, the Wildlife Service wants the public to read it and comment about its proposals.

Here are some of the pertinent items mentioned:

One is dividing jaguar recovery habitat into two segments. The first is the “Northwest Recovery Unit” (NRU) from south/central Arizona and southwest New Mexico to the Mexican state of Colima on the Pacific coast; the other is the “Pan-American Recovery Unit” (PARU) from Mexico to Argentina. We, of course, fall into the first category, although the difference in habitat between southern Arizona and Colima is considerable.

Jaguars, being large carnivores, are going to need a substantial prey base when our nonexistent populations suddenly start breeding and fully occupying all their designated “critical habitat” in Arizona and New Mexico. The Wildlife Service wants surveys of the “deer, javelina, coati, skunks and jackrabbits” it says the big cats will live on. Hunters of deer and javelina might well want to pay close attention to this because the feds state that they want to make sure there’s plenty of prey. They may well feel that such meat is better served to jaguars than humans.

Of course, no matter where jaguars live, they, like Mexican gray wolves, have a hard-wired tendency to kill livestock. Within the draft recovery plan, it is stated that the feds want to develop “jaguar friendly livestock management practices”. They want to “decrease jaguar/livestock conflicts” and will provide “livestock loss compensation”. Just ask any rancher with losses to Mexican gray wolves and you’ll find these forms of compensation are never adequate.

The Jaguar Recovery Team (JRT) wants to allow for “adaptive management”, just like it does with the Mexican gray wolf reintroduction, because, despite all the “experts” involved, no one really knows what will happen when all their lofty proclamations are put into play. One thing the recovery plan states is that they need to be “prudent” and maintain possible jaguar habitat in the USA in case breeding female jaguars suddenly decide to abandon preferred habitat and move north.

The recovery goals are so convoluted and dependent on surveys and monitoring that are so difficult that it renders them ineffective or dangerous to the beasts – remember the death of Macho B. Maintaining or building populations in foreign countries is a major portion of the recovery of the species yet the Wildlife Service has little or no say in such sovereign affairs. Still, the jaguar won’t be delisted in the USA or anywhere, it is stated, until the goals are attained throughout North, Central, and South America.

The projected cost for the recovery is $56 million for the first five years. But the recovery plan says it will take 50 years to completely recover the jaguar from Arizona/New Mexico to Argentina, and that is projected to cost almost $605 million. Of course, president-elect Trump may well have something to say about all this should it ever cross his desk once he’s in office.

A CBD representative has already been quoted as saying his organization isn’t pleased with the recovery plan because it doesn’t call for translocating jaguars from somewhere they want to be into the USA where they don’t want to be. And that the designated “critical habitat” in Arizona and New Mexico is much too small. Are there more lawsuits coming? You can bet on it.

You can find the whole scheme on the FWS website and check it out yourself at: https://www.fws.gov/southwest/es/arizona/Jaguar.htm.