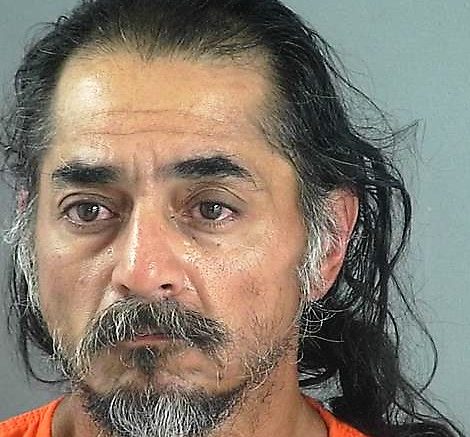 Contributed Photo/Courtesy GCSO: Rudy Villalba is facing additional drug charges after being caught with a needle with drug residue and a small amount of marijuana during a warrant sweep in conjunction with U.S. Marshals.

GRAHAM COUNTY – A wanted man is looking at a couple more charges being added to his docket after officers located marijuana and drug paraphernalia near him while he was arrested in a warrant detail Sept. 13.

U.S. Marshals were in Graham County last week as part of its warrant sweep operation that included Graham, Cochise and Pima counties. In Graham County, the officers joined with local law enforcement to arrest more than 10 people during the sweep.

One of the suspects, Rudy Medina Villalba, 50, had additional drug charges recommended in his arrest after officers located a syringe with methamphetamine residue and a cigarette pack with a small amount of marijuana in it buried in the dirt next to where Villalba was found hiding.

According to a Graham County Sheriff’s Office report, Villalba was wanted for an outstanding felony probation violation issued April 8. After not locating him at his parents’ address – which was listed as his home address – officers decided to look for him at his girlfriend’s residence at 6153 S. Lebanon Loop Rd.

Upon arrival at about 11:45 a.m., officers saw numerous individuals scatter from a broken down piece of heavy machinery located south of the residence. The officers then encountered three male subjects who each denied knowing the whereabouts of Villalba.

A short time later, a U.S. Marshal located Villalba hiding on the east side of the broken down piece of heavy machinery. Officers then noticed a syringe partly buried in the dirt directly in front of where Villalba was hiding. A Graham County Sheriff’s Office investigator dug around in the dirt and located the cigarette pack as well.

According to the report, Villalba admitted the syringe was his and that he used it to inject drugs. However, he denied possession of the cigarette pack with marijuana. The syringe was tested and indicated the use of methamphetamine.