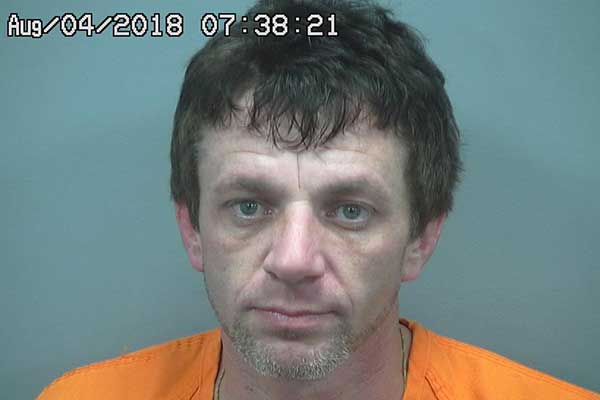 SAFFORD – Authorities were dispatched around 3:45 am Saturday morning when they received a call about some suspicious activity seen at Vista Recycling. It was reported that a male had entered the fenced yard to the business and was removing items and loading them into a truck.

When an officer arrived at Vista Recycling, the truck was located in the apartment parking lot adjacent to the business. The officer noticed the fence west of where the truck was parked, was knocked down. The officer began searching the yard, and radioed for additional assistance in the search of the male suspect. Police ultimately found the man hiding behind a large dumpster in the corner of the apartment complex. The man was identified as Joseph Taylor Goodman. Goodman stated that he had been having some financial struggles and was recently kicked out of his parent’s home. Goodman stated he entered the Vista Recycling yard to remove the scrap metal and intended to take it to Phoenix where he could make a profit from the scrap metal. Goodman reportedly told police that he had placed some brass in the bed and also inside of the truck.

Police observed the brass in the back of the truck. While searching the vehicle’s interior, a black pack containing an additional amount of brass was found. Also, in the driver side door, authorities found a canvas bag that contained three suboxone pills. In the area of the front passenger seat, a glass smoking device was found with an amount of marijuana still inside of the bowl. Goodman apparently told authorities that he had a medical marijuana card, but did not have it with him. When asked if he had a prescription for the pills, Goodman stated he did at one point but the prescription was expired. Goodman said that he had an opioid dependency years prior, and on occasion, will take a Suboxone to curb the desire for opioids.

Goodman was transported to the Graham County Jail where he was booked for 3rd Degree Burglary.