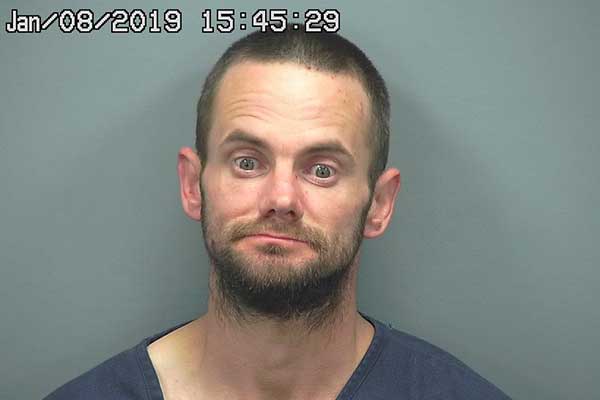 A Safford resident called police Thursday night to report that his neighbor, Jerry Morris, had come to his residence, knocked on his door and made threats.

The issue began, when Morris’ neighbor saw a woman, who appeared in distress, walking toward Morris’ residence. The woman said that she was homeless and was seeking help from Morris. The neighbor told the woman that she would not find any help from Morris and offered to take her to his church relief program.

The woman agreed and went into the man’s house. Soon, Morris arrived and began banging on the neighbor’s security door. The man opened the door, knocking Morris down in the process. The neighbor told Morris to get off his property. Morris threatened the man, saying that he would “get him” before leaving the property. The man apparently took the woman to his church before reporting the incident to authorities. When describing Morris to police, the reporting party said that he was wearing green camo pants.

Authorities were dispatched to another residence that evening in reference to a man with green camo pants knocking on doors a few blocks away. The reporting party told authorities that he was asleep when a male subject began knocking on a piece of wood that covered an old door next to his front door. When he opened the door, he saw a man crawling on the ground in his front yard next to his vehicle. He thought the man was trying to break into his car. He yelled at the suspect, who stood up and took off running. The resident pointed to a bicycle in the driveway that the suspect left when he fled.

Officers searched the area and located Morris outside a bar near Main Street in Safford. When police approached Morris, he ran into the bar. Authorities apprehended him and placed him in handcuffs. He was taken back to the residence where he left his bike to see if the victim could identify him. On the way, Morris blurted out that he had just stopped at the residence for some help. He claimed that the resident chased after him with a knife.

Upon arrival, the resident positively identified Morris as the suspect crawling in his front yard. He denied chasing Morris with a knife. He told authorities that he had just told Morris to get off his property.

On the way to the jail, the officer heard what sounded like pills in a bottle coming from the back seat, where Morris was sitting. The officer asked Morris what he was doing. Morris said that he had just taken a whole bottle of pills. The officer pulled over and opened the back door. There was a prescription bottle that had been in Morris’ pocket that had spilled pills all over the back seat. Morris claimed he had taken 4 or 5 pills. He said that it was Rimron, and that he takes it for depression and anxiety. The pills were gathered up and Morris was taken to the hospital for evaluation.

At the hospital, Morris admitted that he had lied and had only taken one pill. He was medically cleared and booked into the Graham County jail for disorderly conduct.