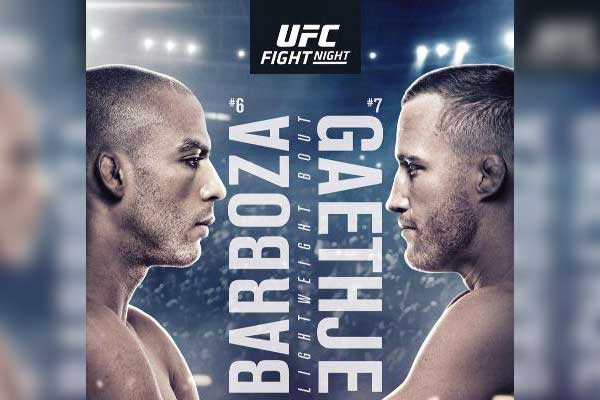 Safford native Justin Gaethje (19-2) will be back in the UFC Octagon Saturday March 30th against Brazil’s Edson Barboza (20-6) as they headline UFC Fight Night Philadelphia.

Gaethje is the 7th ranked Lightweight in the world and is coming off the shortest fight of his professional career after he knocked out James Vick 1:27 into round 1. That fight was August 25th. It will be 218 days since Gaethje has been under the the UFC lights. Barboza last fought December 15th and got a 3rd round knock out of Dan Hooker.

Barboza is the 6th ranked lightweight in the UFC and has fought some of the best in the business including losses to Khabib Nurmagobedov and Kevin Lee. This will be just his 2nd headliner compared to the 9th for Gaethje over his career.

When asked about the match up Justin Gaethje said, “In this business the next one is always the biggest fight ever, so yeah, this is the biggest fight of my career. I’m super confident though and ready to get back in the octagon,” he added.

Gaethje has taken plenty of public ridicule for the way he approaches his fights in the ring. He takes more damage than most as he stands in the pocket and trades punches with just about every opponent. That might be different this time around though. “I’m a little older and wiser now,” said Gaethje. “If there is a takedown available, I’ll take it.”

Gaethje was an All-American wrestler at Northern Colorado University and has yet to show that skill as a WSOF or UFC fighter.

Barboza is a World renowned Muay Thai Kickboxer and holds a 25-3 record with 22 wins by knockout. Gaethje has been showed of some of the best kicks in his past fights but knows he’s met his match this week. “He’s obviously a great kickboxer and has some hellacious kicks.” He probably kicks harder than me but you needs space to kick and I won’t give him any. We will see how he deals with my pressure.”

Gaethje is known as “The Highlight” and he wants to live up to that with the UFC now airing on ESPN. “I grew up watching Sportscenter and always wanted to be on the Top 10. If everything goes as planned I’ll be there Saturday.”

The main card will start at 4pm Arizona time with Gaethje being the final fight of the night. You can watch the prelims and main card for free on ESPN Saturday.