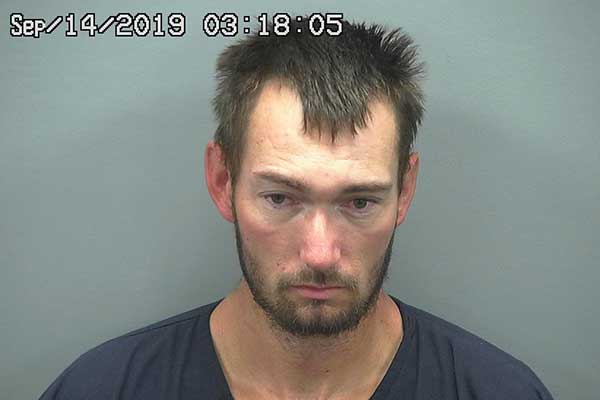 A Safford police officer was called to Safford High School last Friday at approximately 1:30 pm, in reference to a vehicle that had been vandalized. The reporting party told authorities that she had left her purse in her car on the middle console. When she came back to her car she found that her driver-side window had been smashed. The window was not broken all the way out and the purse was still in the vehicle. It appeared that the window had been hit several times with a blunt object but the glass stayed together.

The officer and school authorities began looking at surveillance video and located the event on camera at approximately 1:14 p.m. The video showed a black Honda sedan park at the high school by the office. The driver, later identified as Johnny Sanders, got out of the car and walked half way to the office, then turned around. It appeared that he was walking back to his vehicle but he continued walking toward the victim’s vehicle. He looked through the windows of several vehicle’s before getting back into his car and driving out of the parking lot.

The video showed the Honda pull into the Ruth Powell School parking lot and park. He got out of the car and looked in the windows of two vehicles in the parking lot. He then got back in his car and drove off. The car is seen on video driving back to the high school and backing into a space by the victim’s vehicle. Sanders is seen getting out of his vehicle and crouching down. He then got back into his vehicle and drove over to the bus barn. Shortly after Sanders drove away, the victim is seen walking toward her car and finds that it’s been vandalized.

The officer asked the victim to get a quote for fixing her broken window. When the victim went to get a quote from a glass shop, she was told that hers was the second car that day that had been brought in with a broken window. They told her that the first car had been damaged in the Safeway parking lot. The Safford officer checked with Thatcher Police Department and found that a report had been made about the car damaged at Safeway. He contacted the officer who took the report and learned that the car had been damaged much like the one at Safford High School. The two officers went to Safeway and looked at surveillance video of the parking lot.

The video footage showed the victim’s car right in the center view. While reviewing the video, Sanders could be seen walking around the parking lot looking at cars just after noon. According to the police report, Sanders would grab a grocery cart every once in a while to try to blend in with other customers in the parking lot. It’s believed that Sanders hit the victim’s window with a blunt object every time he walked by the car but the window never shattered. He left the parking lot at approximately 12:45 p.m. and entered the Safford High School parking lot at 1:12 p.m.

The two officers went to Sander’s home to talk to him. They found the Black Honda parked in the driveway. Sanders greeted the officer from behind a gate and agreed to come out and talk to them in the driveway. The Thatcher officer asked Sanders if he had been at Safeway and the high school. He said that he had been been in parking lot near JD’s but not at Safeway. When asked about the high school he originally denied that he was there but then said that he had gone to the high school to ask for directions to the bus barn. He then said that he had followed a bus to the bus barn. The Thatcher officer noticed the shirt Sanders was seen wearing in the surveillance video laying over the seat in the Honda and asked if he’d been wearing the shirt. Sanders initially denied wearing the shirt, but then admitted wearing it at the bus barn.

The officers placed Sanders in handcuffs and advised him that he was being arrested for criminal damage. They told him that they had him on video by both vehicles as well as looking into other vehicles. Sanders denied any involvement in the two incidents. The Safford officer showed Sanders a still shot of the video showing him by the vandalized car at the high school and asked if it was him in the photo. Sanders admitted that it was him in the photo and said that he was walking to the bus barn. Sanders told the officers that he had been walking around the vehicles looking for a friend. He was insistent that they did not have him on video doing anything wrong. He kept saying that he was either looking for a friend, using wi-fi, or looking for the bus barn. He denied every instance of criminal damage or looking into vehicles.

While the Safford officer was looking for identification, he noticed a personal check in Sander’s wallet made out to a financial institution along with a payment voucher from somebody else’s account. The officer asked Sanders why he had the check. Sanders said that he gets other people’s mail all the time and he was going to send it back to the sender. The officer asked why the check was not in an envelope and Sanders claimed that he was going to take it back himself. The officer told Sanders that he would be keeping the check since it did not belong to Sanders and would be making contact with the rightful owner. He told Sanders that he would be following up with him if he found out that Sanders was tampering with mail.

Another Safford officer arrived to question Sanders about a shoplifting case a a local hardware store. Sanders was then booked into the Graham County Jail for two counts of criminal damage.