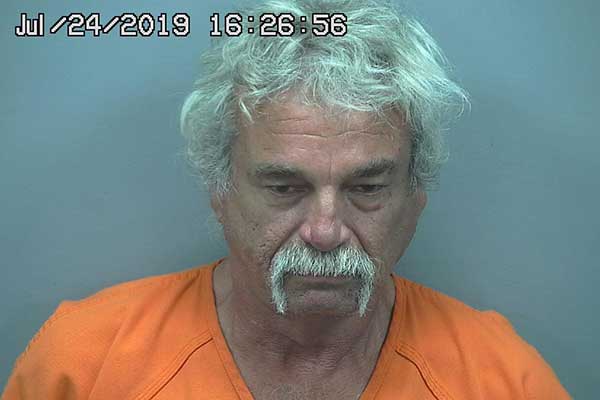 A tenant of an apartment complex in Safford was arrested last Wednesday after causing a disturbance at a monthly event at the complex.

Safford police were called to the apartment complex at about 10:45 a.m. The reporting party said that his wife has a restraining order against another tenant, identified as Elvis Lee Gates III.

Gates apparently showed up to an event put on by the Graham County Community Action program. Each month the organization hands out fresh produce to the tenants of the apartment complex. When Gates showed up, the manager of the complex reportedly told him that he couldn’t be there at the same time as the woman who has a restraining order against him. She asked him to come back later.

This apparently made Gates mad and he started yelling at the woman with the restraining order, telling her that the order was no longer valid. The manager asked the woman to go get a copy of the restraining order and the woman left the area to retrieve the document. Witnesses said Gates was speaking loudly and pointing his finger while talking, causing a disturbance. Gates left the area as well. Gates was described as wearing camouflage.

The officer briefly walked to his vehicle and was informed that Gates was back. The officer recognized Gates by the description, so he approached him and said, “Hello, Elvis.” Gates responded with, “Yes, sir.”

The officer explained that he had received a call that Gates was causing a disturbance. According to the police report, Gates immediately became loud and defensive, saying, “If you have a warrant, then arrest me!” Gates held his hands out in front of himself so he could be handcuffed.

The officer explained that he did not want to arrest Gates but needed to talk to him about the earlier incident. Gates was extremely uncooperative and continued to raise his voice, yelling that he wanted a lawyer and that he was going to get “kicked out because of this.”

The officer tried telling Gates to calm down and behave, but that agitated Gates even more. Gates continued to cause a disturbance and tried to walk away. The officer told him that he was being detained and need to stay. At this point, Gates held out his hands and told the officer to arrest him.

The officer handcuffed Gates’ hands in front of him and began to escort Gates to his patrol car. Gates was holding a plastic water bottle and said something about wanting to throw it. Gates then lowered his hands and quickly raised them, throwing his water bottle toward a group of people. The officer forced Gates onto the hood of the patrol vehicle and told him to stop. Gates pushed back on the officer and was subsequently forced to the ground.

Other officers arrived to help. Gates continued to yell obscenities at the officers and refused to stand up or cooperate. The officers had to carry him to a patrol vehicle, where they handcuffed his hands behind his back. Gates finally stood on his own and sat in the back seat of the patrol car.

On the way to the jail, the officer asked Gates why he was so upset, but Gates refused to answer.

Gates was booked into the jail for disorderly conduct and resisting arrest.