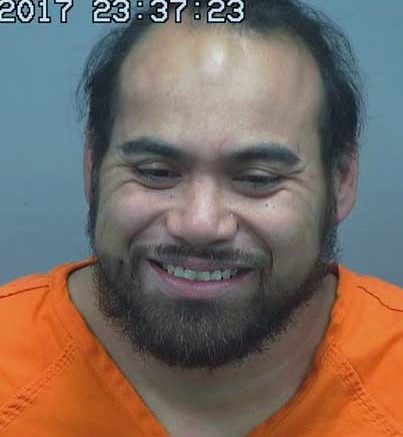 Contributed Photo/Courtesy GCSO: Richard Rodriguez was booked into the jail after allegedly assaulting his wife.

Continues to react belligerently to officers during arrest

SAFFORD – Richard Rodriguez, 32, was arrested for assault and disorderly conduct/domestic violence Dec. 26 after grabbing a Native American woman by her collar and shaking her while yelling.

According to a Safford Police report, a Graham County Sheriff’s Office deputy was in Jerry’s Restaurant at 1612 W. Thatcher Blvd. at about 9 p.m. when a person entered the restaurant and advised of a domestic dispute behind the Motel 6 at 1578 W.. Thatcher Blvd. The area is a popular congregating spot for local homeless.

According to the deputy, he responded to the scene and witnessed Rodriguez yelling at a woman he later claimed was his wife. Both individuals showed signs of intoxication.

As the deputy approached, Rodriguez became hostile and aggressive toward him, causing him to draw his TASER and to detain Rodriguez, according to the report.

Rodriguez allegedly told officers that he was upset with his wife for trying to control him and not let him go out drinking alcohol with other guys. He also admitted to swearing at the victim and grabbing her shirt.

The victim told officers that Rodriguez grabbed her by her neck and shook her while yelling. She said she didn’t want Rodriguez to get arrested, however, because she didn’t have anywhere to go.

Officers offered to take the victim to the Mt. Graham Safe House or give her a ride to Bylas and she chose to go to Bylas.

Rodriguez was combative while in police custody and had to have a hobble restraint placed upon him. He continued to be disruptive and threatened the officer and the officer’s family while en route to the jail.

Once they arrived at the Graham County Adult Detention Facility, Rodriguez was placed into a restraint chair while continuing to grind his teeth and “glare” at the officer, according to the report. He was then booked into the jail on charges of assault/domestic violence and disorderly conduct/domestic violence.