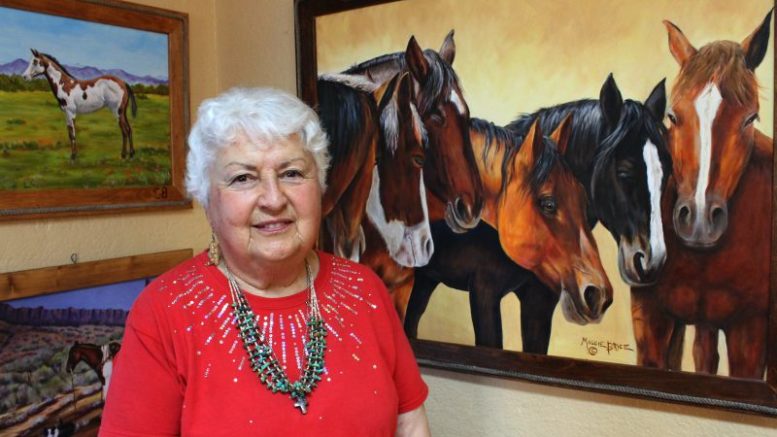 THATCHER – With an eye for a great photo, and the talent to recreate it in vivid oil paints, local artist Maggie Bryce is the featured artist at the Little Art Gallery for the month of March.

Gila Valley Central caught up with Maggie Bryce at her artist reception on Friday at the Little Art Gallery in Thatcher. With over two dozen oil paintings hung at the gallery, Bryce told Gila Valley Central that some of the pieces on display were just barely finished.

“There’s three brand new ones in there. The one with the cow being doctored with a herd of cows, the cowgirl, I just finished those.”

Bryce told Gila Valley Central that she photographs particular scenes that she finds visually appealing, and then turns them into oil paintings. When asked what she likes to center her work around, Bryce said that she particularly enjoys a western theme. Bryce said she attributed this love of the western theme to her childhood in Phoenix, and Salt River.

“Horses, cows, cowboys, that’s my passion,” Bryce said. ”  When I think back, sixth grade, we lived at Horse Mesa and that’s on the salt river, my step father worked at the dam. We were kind of wild little hooligans running all over the place, and we just loved the desert, that’s what I grew up in. Phoenix as well. Horse Mesa was a little community of people that worked at the dam. We had a one room school house, it was a really good experience, I liked it.” 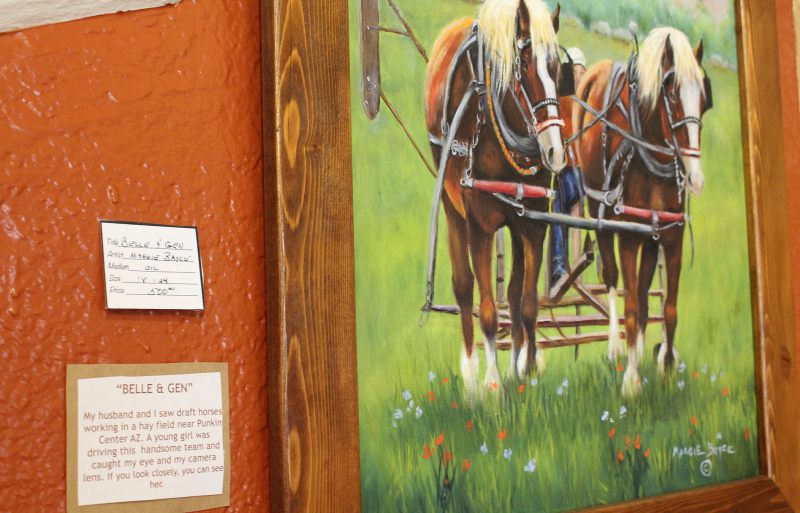 Brooke Curley Photo/ Gila Valley Central: Maggie Bryce has her artwork pieces up, and beside each is a small informational plaque describing the piece’s history.

Currently Bryce works with oils, having worked with watercolors and graphite in the past. Sadly, Bryce said that she has developed arthritis in her hands, thus making it painful to create graphite sketches. For the beginning artist, however, Bryce said that it is important to never give up on the artistic passion.

“I would say keep trying. Not everybody starts out being really good. Keep trying, take some lessons and learn the techniques,” Bryce said.

The Little Art Gallery, located at located 3915 W. Main St. in Thatcher, is the headquarters of the Art Guild of Eastern Arizona. Bryce told Gila Valley Central that the art guild was created by Edith Austin and herself, roughly a decade ago.  The reason for the creation of the art guild was because the severe lack of any type of artist outlet.

“We were disgruntled because there wasn’t anything here for artists. So we decided to just start our own,” Bryce said. “So we did.  And so we got eight people (to join.) I have a picture of us somewhere. It’s been ten years ago, I think.”

Bryce majored in art in college, having graduated with an associate in art.  She has since taken lessons from private instructors, and continues polishing her artistic talents. Bryce told Gila Valley Central that she has been painting for at least 35 years, and has been an artist since she was two. She told Gila Valley Central that for now, she just wishes to keep painting.

“I just like to keep painting. I’m slow now,” Bryce said. ” The older I get the slower I get, but hopefully the quality is there.”

Maggie Bryce will be the featured artist through the month of March at the Little Art Gallery located at 3915 W. Main St. in Thatcher. The gallery is open 10 a.m. to 4 p.m, Tuesday-Saturday.