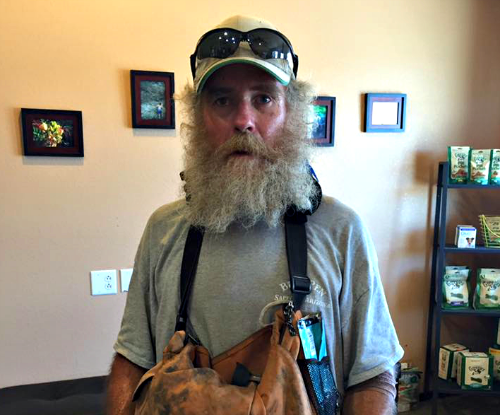 On Wednesday, May 25th, one of the local homeless men, Gene, came into the Desert Cross Veterinary Hospital in Thatcher. He is a homeless man who usually rides a bike and carries his prized dog in a bag. The dog was a twelve year old tan female chihuahua named Penny.

Earlier that day, Gene was beaten up by a band of men who tried to steal his bike. Gene was able to fight off the group of men and saved his bike. However, he had to go to the hospital and see to multiple broken ribs. While at the doctor, he had to leave Penny in the pouch outside because he couldn’t bring her into the hospital. During that time, someone either took her or she ran away.

Heartbroken, Gene went to the Desert Cross Veterinary Hospital in Thatcher. He told his story to Dr. Chapmen, who promptly posted the story on the Internet. “Gene loves that dog more than anything in the world,” Dr. Chapmen posted on the Deseret Cross Facebook page, “She is his only companion. He brings her in for exams and vaccinations and takes great care of her. He is completely distraught and heartbroken that someone has taken his dog. If you have seen Penney or know anything about who might have taken her, please bring her to the clinic. She is greatly loved and needed.”

The story was shared instantly around the circle of local Facebook pages. It touched people’s hearts and enraged them at the same time.  “I’m so sorry Gene!! I have shared this with my Safford friends, not only to have yourself hurt but to lose your best friend. I pray Penny is found,” one commenter said. The fact that it happened in Safford to a harmless man who had so little to begin with enraged many locals. “That is horrible. Anybody that hurts somebody physically or mentally whatever the circumstances is a coward and karma will hit them eventually,” another commented.

Over the time of three hours and 203 shares, Penny was miraculously found. She was discovered hiding under Shannel Allred’s porch. The Allred family brought Penny into the Desert Cross Clinic immediately, and all that was left to do was find Gene.  Throughout the Facebook network, families and friends got together and quickly found him.

It’s times like these that we are reminded, yes there are bad people in the world. But there are good people too. What the men did to Gene is inexcusable, and we hope justice comes on swift wings by the work of our local law enforcement. However, we can be comforted in the fact that there are people in our valley who will work together to help someone they don’t even know.