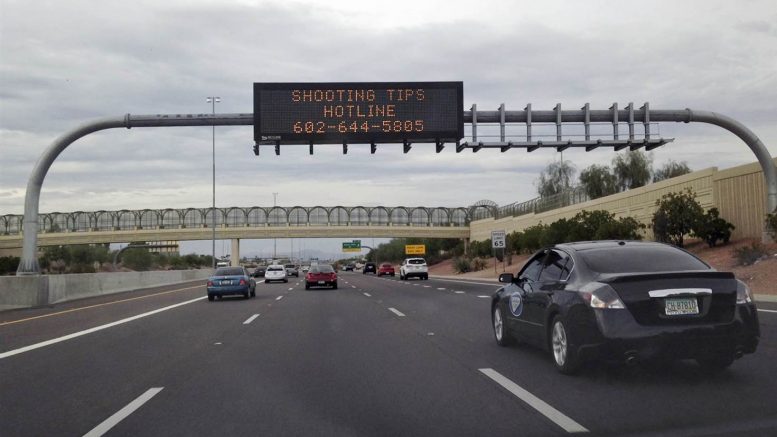 FOUNTAIN HILLS, Ariz. (AP) — A gunman armed with a rifle, body armor and extra ammunition opened fire at cars on a highway in the Phoenix outskirts, leaving at least two people injured before police captured him near a stolen car that crashed into a ditch, authorities said Wednesday.

Before his arrest, the suspect had carjacked a vehicle at a gas station and shot at a state trooper’s cruiser during a manhunt Tuesday night. The officer was not injured, but one person was grazed on the head with a bullet and another was hit in the leg during the highway shootings.

The bizarre series of crimes began unfolding when drivers called 911 saying a man fired at them with a rifle or “machine gun,” said Capt. Damon Cecil, a spokesman for the Arizona Department of Public Safety.

It’s not clear how many cars were struck or whether the man, whose name has not been released, was shooting at passing cars from a vehicle or the side of State Route 87, also known as the Beeline Highway, which hugs Phoenix’s eastern suburbs and heads to cities in northeastern Arizona.

“This is an active investigation with additional victims whose cars were struck by bullets,” Cecil said.

Troopers responding to emergency calls about the shootings found the victims, one who sought his own medical attention for a minor grazing injury and another who was taken to a hospital for a leg wound that was not life-threatening, Cecil said.

The suspect then drove to a gas station, stole a car at gunpoint and fled. During the search, the man fired several shots that hit a trooper’s patrol vehicle before officers lost track of him for about three hours, Cecil said.

The gunman was arrested after a police helicopter spotted the stolen car in a ditch off the highway. Officers found him lying on the ground in a fetal position, with an AR-15 rifle, body armor and numerous magazines of ammunition nearby, Cecil said.