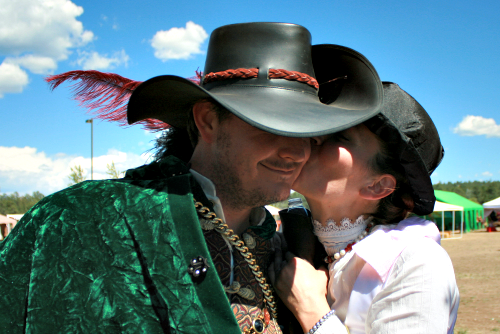 Pinetop-Lakeside – Visiting a renaissance fair stimulates the senses and the Medieval Mayhem Renaissance Faire in the White Mountains doesn’t disappoint.

Immediately upon entry to the faire, visitors are transported back in time thanks to the ambiance created with actors speaking Old English, shops selling fantasy and historically-themed art, clothes and jewelry with music and dancing throughout.

The Medieval Mayhem Renaissance Faire is situated off Woodland Road in Pinetop-Lakeside. The trees and cooler temperatures offer a welcome break from the heat to many patrons. Although it was still a warm weekend, it was much cooler than Phoenix orTucson.

Executive Producer Daris Gibbons, a massage therapist by trade, explained the origins of the faire and said it occurred in an interaction between her husband and herself.

“I was working with a group of women at a local greenhouse (at the time), Gibbons said.  “This greenhouse also had a little coffee and sandwich shop and several buildings which the owner rented out to folks like me.  We were looking for way to promote the location when my husband said, ‘Why not do a Renaissance Faire?’ My reply was, alright! Since we had not been to the Arizona Renaissance Festival in several years, we were excited at the prospect (of creating our own).  Two-and-a-half months later, Medieval Mayhem was born.  That was in 2007.”

Every year the festival’s attendance varies, but usually it entertains roughly 2,000-3,000 people annually.

“We fully intend to keep the festival going and are hoping for some new and fun things beginning in year 10,” Gibbons said.

After a weekend of song, revelry and sword fighting, one can only guess what next year will bring. Congratulations on another great year, and we hope to see you again next year!