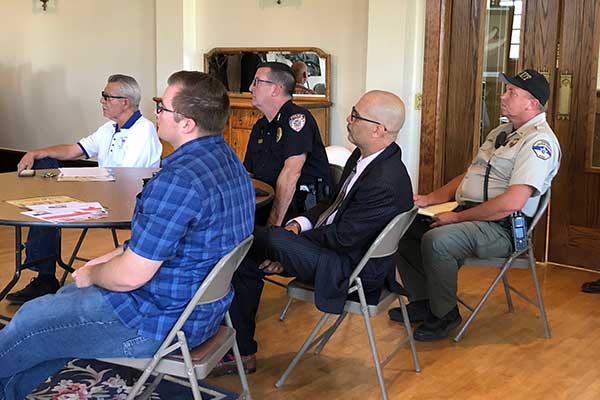 Local civic leaders were invited to a special presentation on distracted driving last Thursday as part of a traveling road show presented by Brendon Lyons, a former firefighter in Southern Arizona who was seriously injured in an accident involving a distracted driver.

The event was organized by Ákos Kovach, Economic Development Coordinator for Greenlee County. Presentations were made in Benson, Willcox, Safford and Clifton.

The event was organized as a public awareness and information tour to act as catalyst to enact ordinances throughout the three counties of Cochise, Graham and Greenlee Counties and /or the cities and towns in those counties. The objective of the proposed ordinances is to stop texting while driving.

A small group of elected officials and governmental representatives gathered in the City of Safford Annex to see the presentation and ask questions.

Kovach introduced the event and said that the objective of the event was mainly to present information. “Saving lives is really what this road tour has been about,” Kovach said. “The primary focus is to preserve the life of, not just children on bicycles and older adults on motorcycles, but each and every one of us that travels streets and highways.”

“Distracted driving kills! That’s an unequivocal fact,” Kovach said. “To that end, what we’re trying to accomplish is to heighten awareness, and educate the public.”

Oro Valley Police Chief, Daniel Sharp, addressed the group and discussed the impact the distracted driving ordinance has had in Oro Valley. Chief Sharp told the group that 37,461 people were killed in traffic accidents in 2016. “94% of those deaths are caused by human error,” Sharp said. “Distraction is certainly one of those errors.”

“If we have people that are driving under the influence of electronics,” Sharp said, “Then our police officers should be able to stop them from doing that, because they’re not only endangering their own lives, they’re endangering the lives of other people around them.”

Oro Valley passed a distracted driving ordinance in January of 2017. The “hands-free” ordinance means that drivers are not allowed to hold a cellular phone or other electronic mobile device while operating a motor vehicle. The ordinance also applies to drivers stopped at a red light. Exceptions to the ordinance include 911 calls and calls to a hospital or physician’s office. The Oro Valley ordinance allows drivers to only make calls using hands free technology, such as Bluetooth, or systems that are integrated with the vehicle.

Chief Sharp said that the since enacting the hands free ordinance two years ago, the number of traffic stops are down and they’re seeing fewer accidents in Oro Valley.

The next presenter was Brendan Lyons, the executive director of ‘Look! Save a Life,’ a non-profit organization dedicated to bringing awareness to all who use public roadways of the ever-increasing dangers of unsafe and distracted driving.

Lyons told the group that, as a former firefighter, he often responded to tragic, yet preventable traffic collisions, caused by distracted driving. In 2012, Lyons launched an awareness and educational campaign though LOOK! Save a Life. In a sad twist of irony, Lyons was involved in a tragic accident nearly a year later. On October 4th, 2013, Lyons was struck by a distracted motorist while riding his bike. The motorist was traveling at an estimated speed of 45 mph. The driver received a phone call and looked down for a second to see who was calling and struck Lyons and his girlfriend from behind while riding their bikes on her birthday. 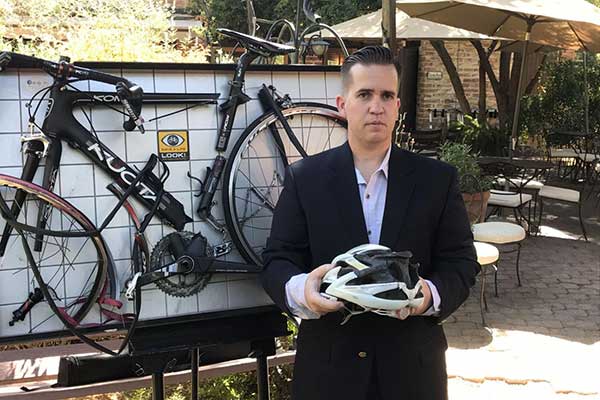 Brendan Lyons standing next to the remnants of his bike.

Lyons pointed out that the Arizona legislature recently passed a “secondary offense” texting ban aimed at teenagers. But studies have shown that adults are far worse at using their phones on the road. Lyons said that the state law sends the wrong message, that “it’s okay to text and drive, as long as you are not a teenager.”

The organizers of the event hope to pass ordinances at the County level or at the City & or Town level to prevent Distracted Driving. Coconino and Pima Counties already have such an ordinance in place as do nine municipalities, including Clifton.

The City of Safford is in favor of such an ordinance and has given Safford Police Chief, Joe Brugman, the green light to work with other city and county law enforcement agencies to come up with a workable and enforceable ordinance.