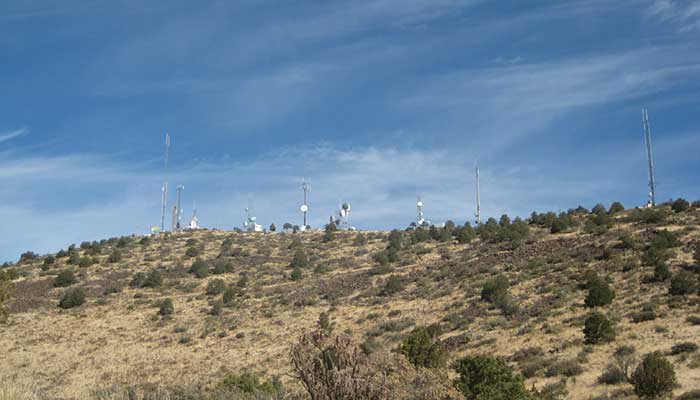 A Forest Service crew and the Bureau of Land Management probably saved commercial radio broadcast in the Gila Valley from being destroyed Wednesday afternoon.

According to Lathe Evans, Assistant Fire Management Officer for the Bureau of Land Management in Safford, a Forest Service crew was traveling in the Black Hills in Greenlee County Wednesday afternoon when they saw a lightning strike hit on Guthrie Peak. They could see flames coming from the mountain.

Guthrie Peak is an area where at least four commercial radio stations have transmitter buildings, called “sites,” and their transmitters are broadcasting 24-hours a day, seven days a week. Broadcast facilities for Kat Kountry, Sunny 102, KJIK and KFMM are located on the mountain as well as two-way and microwave sites.

Evans explained that when the fire started burning on Guthrie Peak, BLM was able to take advantage of two single-seat air tankers that were parked at the Safford Airport. The two planes loaded up Retardant and Foam and dumped approximately 3,000 gallons of retardant onto the burning site.

They were able to extinguish the fire and the ground crews spent the night on Guthrie Peak to make sure the fire didn’t start up again. According to Evans, the fire crews will probably stay on Guthrie Peak until Friday before returning to their home bases.