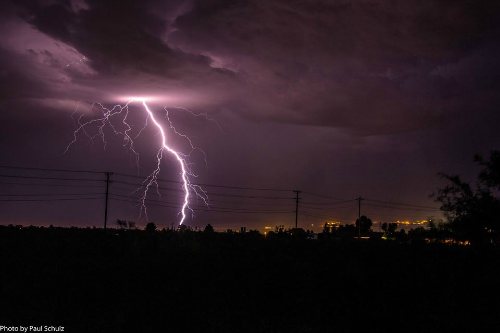 On Tuesday, June 28th, lightning struck a Safford telephone pole. The damage to the pole resulted in a power outage to the smaller neighborhoods of Safford. Police and firefighters came to the location, and power was restored to the area shortly after. However, this harmless, yet forceful lightning strike should serve as a reminder of the power of Mother Nature.

Summer monsoons have arrived, and there is no time like the present to go over lightning safety precautions. Last year, there were two deaths by lightning in Arizona. One fatality occurred on June 27th at the Mogollon Rim, and another was in Benson on June 30th. So far this year, nine people have been killed in the United States by lightning.

Here are some safety tips to take into consideration when the skies get dark and rumbley.

1: Be aware of the whether. If there is supposed to be a storm later on in the afternoon, take Mother Nature into consideration when you plan your day.

2: When there is thunder and lightning outside, go indoors. Find a safe, enclosed shelter when you hear thunder. Safe shelters are offices, stores, and hard-top vehicles. However, while you are in this shelter, avoid touching concrete and water.

3: If you are caught in a lightning storm and you can’t get indoors, crouch close to the ground. Get into a ball-like position with your feet and knees together. DO NOT LIE ON THE GROUND. When lightning strikes, the electric current travels on the top of the ground and can be deadly over one-hundred feet away.

5: During a lightning storm, you will still not be safe on an open porch, gazebo, or sports dugout.

6: Avoid touching concrete floors or walls during a lightning storm. Lightning travels through the mettle bars in the concrete.

Here is some more information on the subject of lightning provided by the National Weather Service.