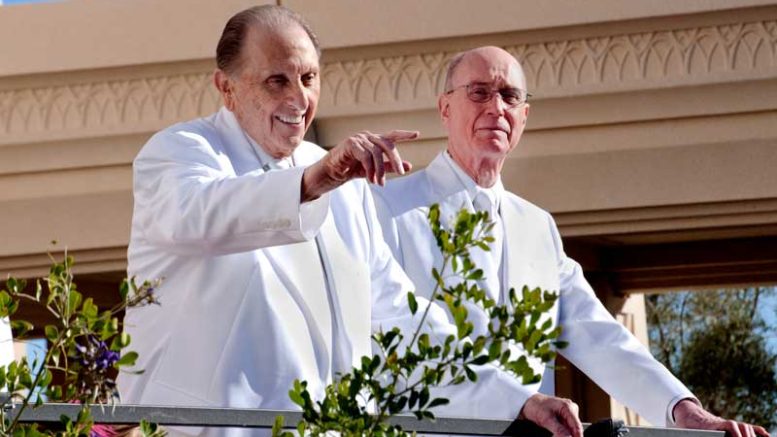 SALT LAKE CITY – With tender feelings, we announce that Thomas S. Monson, president and prophet of The Church of Jesus Christ of Latter-day Saints, died this evening at 10:01 pm in his home in Salt Lake City. He was with family at the time of his passing. He died at age 90 from causes incident to age.

President Monson, who has served as president of the Church since February 2008, leaves behind a legacy of service and good works. A successor is not expected to be formally chosen by the Church’s Quorum of the Twelve Apostles until after President Monson’s funeral.

To the more than 16 million members of the Church around the world, President Monson was an example of one who followed Jesus Christ.

“He loved the cultures of the world, and deeply respected them. And particularly the faith of the people,” said President Henry B. Eyring, who served as first counselor in the First Presidency. 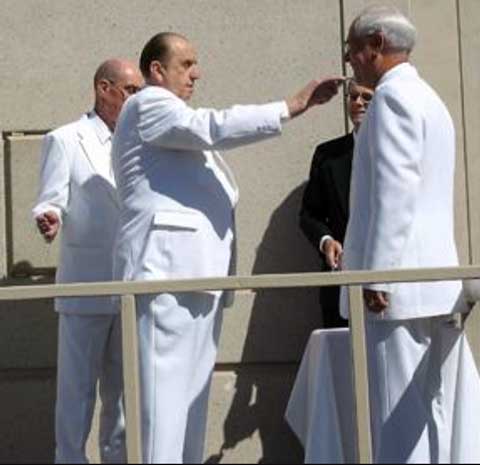 Photo By Rebecca Johnson: LDS President Thomas S. Monson dubs Elder William R. Walker “Sir Walker” with his trowel serving as a sword at the cornerstone ceremony of the dedication of The Gila Valley Arizona Temple in May 2010.

While he served in important Church leadership positions throughout his life, he also ministered quietly to thousands of individuals in homes, hospitals and care centers. “Never let a problem to be solved become more important than a person to be loved,” President Monson taught.

“When I look at his life, he was a member of the Church everyone could relate to and everyone could feel comfortable in his presence,” said President Dieter F. Uchtdorf, second counselor in the First Presidency. “At the same time, when he walked with kings, with prime ministers, with presidents, with representatives of nations, it was the same way. They all felt that he was their friend.”

During his presidency, Church membership grew from 13 million to more than 16 million members worldwide, and dozens of new temples were announced and dedicated throughout the world.

President Eyring added, “I don’t think it ever was the idea that he thought himself a great temple builder. It was that he saw the blessing of having temples everywhere, and he wanted it for the people.” 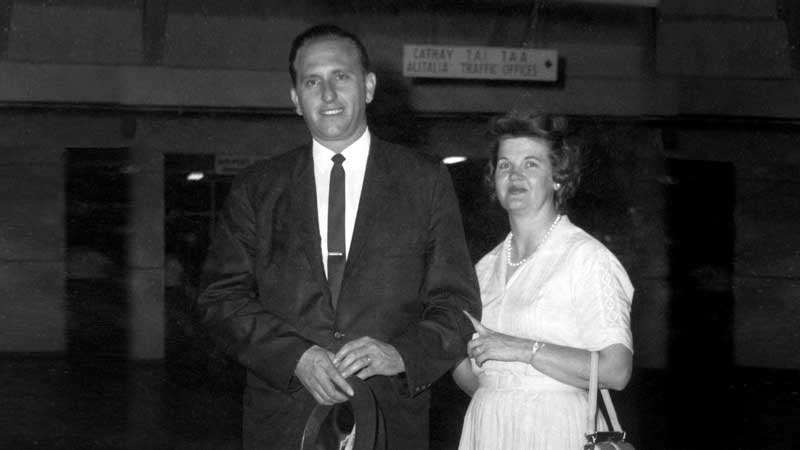 In October 2012, President Monson announced a change to the age requirements for missionaries, which resulted in tens of thousands more missionaries serving throughout the world, impacting the lives of millions.

President Monson dedicated his life to serving in the Church. He became the 16th president of The Church of Jesus Christ of Latter-day Saints on February 3, 2008, following the death of President Gordon B. Hinckley. Prior to that, he served as a counselor in the First Presidency under three Church presidents for over 22 years.

“He’s really the one who’s concerned about the rescue of the one,” said President Uchtdorf, who served as President Monson’s second counselor in the First Presidency. “He is one who walked through the world looking for opportunities where he could serve individuals.” 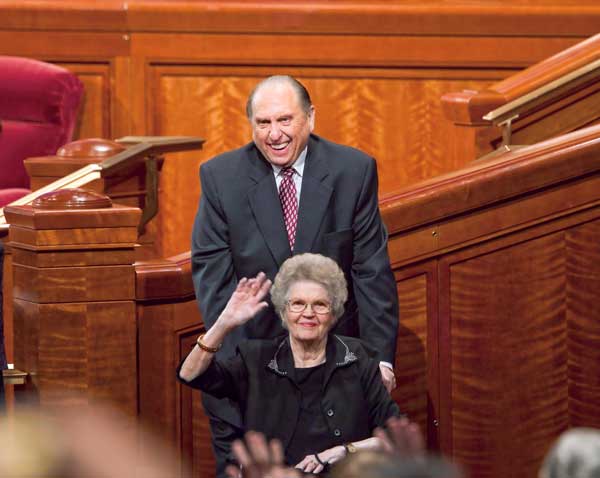 “When Thomas S. Monson came into the First Presidency or when he became the prophet, I don’t think he missed a beat or changed his style or pattern one iota in terms of reaching out to the one,” Elder Jeffrey R. Holland of the Quorum of the Twelve Apostles said. “It’s still very much his style and his pattern; it has been all of his life.”

Thomas S. Monson was sustained to the Quorum of the Twelve Apostles on October 4, 1963, and ordained an apostle on October 10, 1963, at the age of 36. He also served as president of the Church’s Canadian Mission, headquartered in Toronto, Ontario, from 1959 to 1962. Prior to that time, he served in the presidency of the Temple View Stake in Salt Lake City, Utah, and as a bishop of the Sixth-Seventh Ward in that stake. 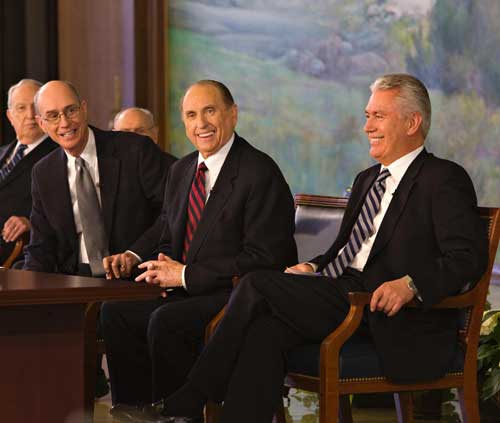 President Monson served in the United States Navy near the close of World War II. He married Frances Beverly Johnson on October 7, 1948, in the Salt Lake Temple. They are the parents of three children, with eight grandchildren and twelve great-grandchildren. Frances Monson passed away on May 20, 2013. Of her passing, President Monson later said, “She was the love of my life, my trusted confidant, and my closest friend. To say that I miss her does not begin to convey the depth of my feelings.”

Professionally, President Monson had a distinguished career in publishing and printing. He became associated with the Deseret News in 1948, where he served as an executive in the advertising division of that newspaper and the Newspaper Agency Corporation. Later he was named sales manager of the Deseret News Press, one of the West’s largest commercial printing firms, rising to the position of general manager, which position he held at the time of his appointment to the Quorum of the Twelve in 1963. He served for many years as chairman of the board of Deseret News Publishing Co. President Monson was president of Printing Industry of Utah and a former member of the board of directors of Printing Industries of America.

Beginning in 1969 President Monson served as a member of the National Executive Board of the Boy Scouts of America. He received Scouting’s highest awards given for extraordinary leadership and service. In 2016, the ground was broken at a Scouting facility in Glen Jean, West Virginia for the new Thomas S. Monson Leadership Excellence Complex. 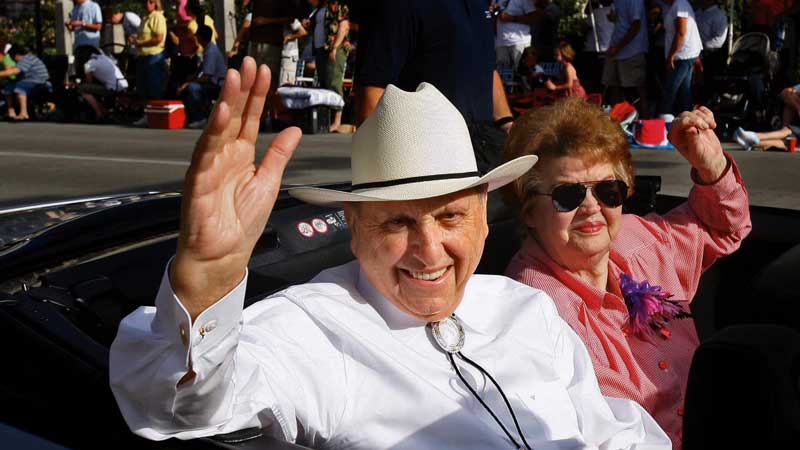 For many years, President Monson served as a member of the Utah State Board of Regents, the body that governs higher education in the state of Utah. He also served as an officer in the Alumni Association of the University of Utah.

In December 1981, President Monson was appointed by President Ronald Reagan to serve on the President’s Task Force for Private Sector Initiatives. He served in this capacity until December 1982, when the work of the task force was completed.

President Monson was awarded the University of Utah’s Distinguished Alumnus Award in 1966. He was also the recipient of the Boy Scouts of America’s Silver Beaver Award (1971), its prestigious Silver Buffalo Award (1978) and international Scouting’s highest award, the Bronze Wolf (1993). In 1997 he received the Minuteman Award from the Utah National Guard, as well as Brigham Young University’s Exemplary Manhood Award. In 1998, he and Sister Monson were each given the Continuum of Caring Humanitarian Award by the Sisters of Charity of St. Joseph Villa.