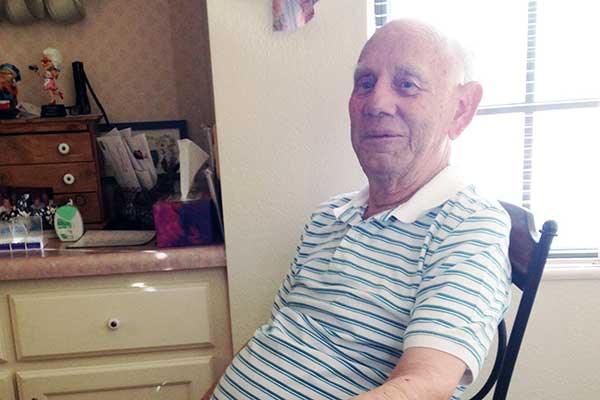 When he was around 3 years old, the family moved to Des Moines, Iowa and that is where Wayne attended schools.  He grew up hunting and fishing with his Dad, Uncles and brother Merlin.  At the age of 17, the family moved to Lucas, Iowa to take care of his grandpa.  After the passing of both of his grandparents in 1958, they moved once again to Oakly, Iowa where Wayne and his family ran the Country Store for a couple of years.  During this time, Wayne met the love of his life, Carol Sue Medearis.  He used to say that he would cruise the town square and tell his friends he was going to marry that girl someday.

In 1960, the day after Thanksgiving, Wayne moved to Arizona with Carol’s family. The young couple married on March 9, 1961 at the First Baptist Church.  They ran the Lebon Park & General Store and in 1963, Wayne began working for the cotton gin for 1 season.  After working for the cotton gin, he started working at Safford Builders until 1980.  Wayne & Carol were then blessed with 2 sons, Kelly Wayne in 1965 and Kevin John in 1969.

While living in Arizona, Wayne continued his passion for hunting and fishing bringing Carol and the boys along where they also enjoyed camping, fishing and hunting with their dear friends the Killians, Olsens and the Sindels.  In 1977, Wayne built the family home where he and Carol are still living today, and in 1980, Wayne began working for A.D.O.T. and remained there until he retired.  After retirement, Wayne and Carol started traveling all over the U.S., including a trip to Alaska with the Thompsons.

Wayne had many hobbies such as metal detecting and restoring old cars.  He was a member of the Saguaro Cruisers, an old car club, and spent many hours working on and fixing up his old vehicles.  In his final years, Wayne enjoyed many sporting events and camping trips with family and friends.  He was outgoing and loved by everyone who had the chance to meet him.

He is survived by his loving wife Carol Krutsinger, his son Kelly (Diane) Krutsinger, his siblings Judy (Lavern) Larrington and Timmy Wright, his grandchildren Kyle and Kaylee and his great-granddaughter KellyLynn.

Wayne is preceded in death by his parents Clell and Margaret, by his son Kevin Krutsinger, by his brother Merlin Krutsinger and by his half brother Robert Ashley.

A viewing will be held on Thursday, September 26, 2019 at McDougal’s Caldwell Funeral Chapel from 6:00 p.m. until 8:00 p.m.  A brief second viewing will be held on September 27th, at the First Baptist Church in Safford at 10:00 a.m.  Following the viewing the funeral services will begin at 10:30 a.m. with Pastor Ken Burk officiating. Interment will be in the Safford Cemetery following services.