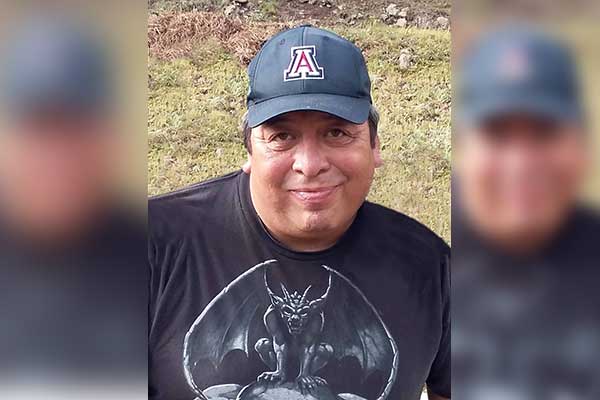 Jim Lozano, 53, of Safford, lost his battle with cancer on June 13, 2018 lovingly surrounded by his family.  He was born October 27, 1964 in Morenci, AZ to Jose Cervantez Lozano & Irene Porto Lozano joining his siblings, Joseph, Tommy & Angela.

Jim graduated from Safford High School in 1982 and then joined the United States Army where he honorably served until 1986.  He returned to the Gila Valley where he began working for Haralson’s Tire Company.  On August 3, 2006, Jim married the love of his life, his “native princess”, Kimberly Morin and with the births of their children Kayla, Samara & Joseph, the little family grew.

When Jim was diagnosed with cancer, it broke his heart when he had to stop working.  He was a hard worker and he loved his job.  He fought with everything he had for eleven long months until the cancer finally won, and he took his last breath,

Jim had many hobbies and interests such as watching football, four-wheeling, fishing, taking care of his dog, Bolt and his 8 black cats, hanging out with family at home and visiting his sister Angela in Mesa, AZ.  Jim was an avid Arizona Wildcats fan who watched them as much as possible with each sport they played.  He also had a few favorite sayings; “Don’t worry about” and “everything is gonna be ok”.  It was this positive attitude that has sustained and helped his family get through this difficult time

Jim is survived by his loving wife, Kimberly, his children Kayla, Samara & Joseph Lozano, his brother Tommy Lozano of Tucson, AZ, his sister Angela Sanchez of Mesa, AZ, and many Aunts, Uncles, cousins and friends who loved him dearly.

He is preceded in death by his parents Jose & Irene and his brother Joseph Lozano.

A viewing will be held on Friday, June 22, 2018 at 8:00 a.m. followed by the recitation of the Rosary at 9:00 a.m. with the Mass of Christian Burial at 11:00 a.m. at the St. Rose of Lima Church with Father Robert Rodriguez as Celebrant.  Interment will be in the Hubbard Cemetery with full military honors by the Gila Valley Honor Guard.