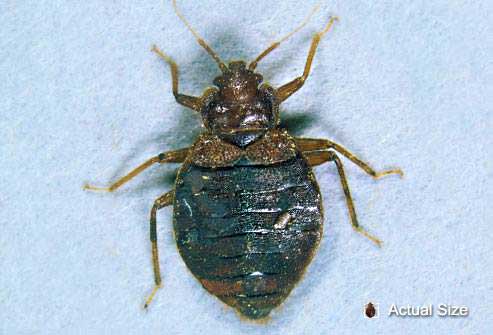 This video shows the setup used to increase the temperature of a home to kill bedbugs.
Video courtesy of Rattlesnake Exterminating

SAFFORD – One wayward backpack, a trip to a friend’s house or an unlucky used furniture purchase and within months anyone’s house could be infected with bed bugs.

Chances are any local of the Gila Valley is or knows someone who has personally had an infestation of bed bugs. Feeding on blood, these pesky bugs are nearly impossible to self-treat and spread easily from house to house.

Mark Curley of Rattlesnake Exterminating, who has been treating bed bugs locally and statewide for over a decade, told Gila Valley Central that it’s not necessarily an ‘if’ but more like a ‘when’ an infestation will occur. According to Curley, within the next ten years, one in every two houses within the Gila Valley will have been treated for or is infested with bed bugs. 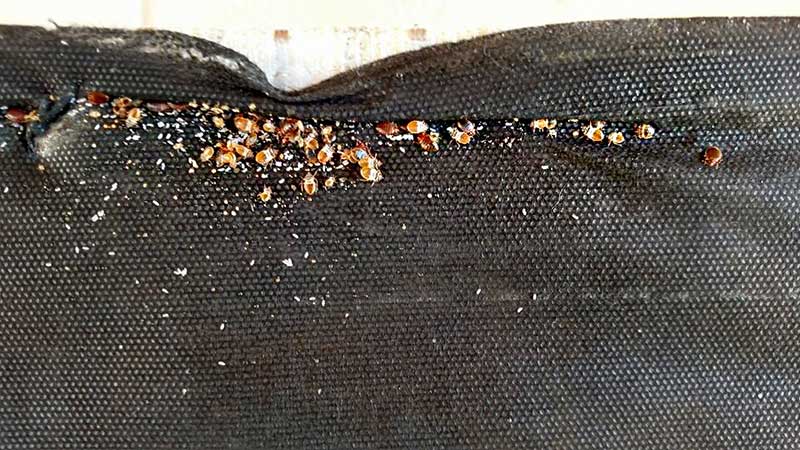 Contributed Photo/Courtesy Rattlesnake Exterminating: This was a bed bug infestation beneath a bed. This photo shows the husks and the bugs themselves in their nest.

“There could be an epidemic anywhere you go. Used furniture, used clothes, I’m not saying you can’t find used clothes at a rummage sale but wash and dry them before you bring them inside,” Curley said. “Don’t bring the clothes into your living room. Just run the clothes to the washer. You do not want to buy used furniture. You can have an inspection done on it but that’s not a guarantee (because) there might be bed bugs embedded inside the furniture.”

The infestation within the Gila Valley has become so intense that it is being transferred from household to household. In years past, an unlucky individual may bring bed bugs home from traveling. However, Curley says that now the majority of the infestations are from bed bugs being carried from one household to another.

“The biggest preventive right now is education,” Curley said. “Bed bugs are brought in by backpacks from kids, from guests coming to your house and spending the night, (and) they’re brought in from family members.”

Do not buy used furniture

Wash previously-owned clothes instantly, do not bring the unwashed clothes into the house if at all possible.

Do not bring backpacks into main living spaces. Keep backpacks in the garage or outside the house.

Do not change for bed right at the bed. Instead, place your dirty clothes in the laundry hamper in the bathroom, or better yet, in the washing machine.

After traveling, NEVER bring backpacks or suitcases into the house

After traveling, wash and dry all clothes you traveled in and with immediately

Animals such as dogs can be carriers of bed bugs.

Bats, especially, can be carriers of bed bugs. If your house is infested with bats, it may become infested with bed bugs as well. Have all bat infestations professionally removed.

Curley told Gila Valley Central that the bug is especially sinister within family circles. If an individual of the family is battling bed bugs, whenever visiting this family the clothes should be instantly washed on returning home, and the bags should be left outside.

“If one family member has these you can always count on the fact that someone else in that family will have them,” Curley said. “They spread from family to family.”

There is also the occurrence of the “super bed bug”, which is an insect that has grown a resistance to most pesticides and is incredibly hard to kill, Curley said that every infestation can be treated. This “super bug” situation happens the infestation isn’t treated properly, leaving bugs that mutate. When encountering a “super bed bug,” the Rattlesnake Exterminating crew attack with a full force. Using heat and intense pesticides, the crew brings the infested house up to 138 degrees in a matter of minutes. 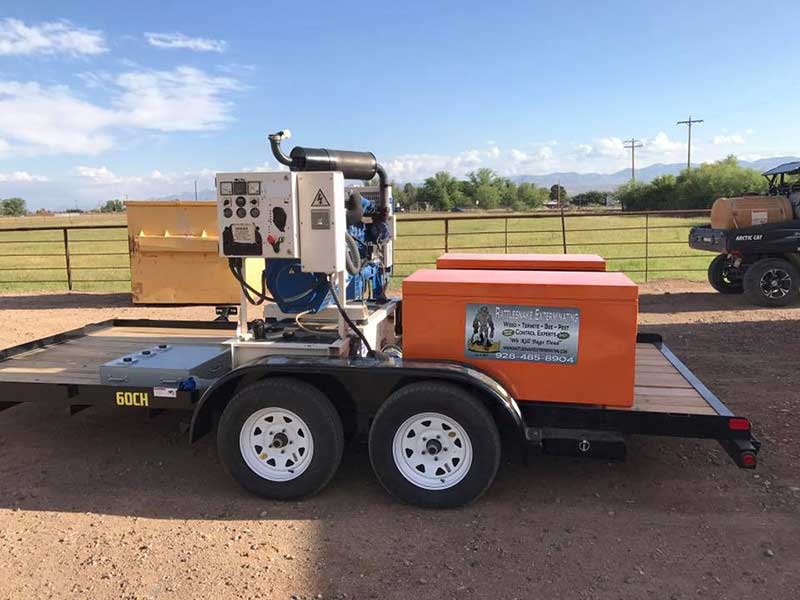 Contributed Photo/Courtesy Rattlesnake Exterminating: This flatbed has very expensive equipment on it that will be used to heat a house to extreme temperatures.

After treating with heat, however, the Rattlesnake Exterminating crew will return and check the furniture, under beds, and even lift up the carpets. According to Curley, using heat is not going to be effective unless it is treated thoroughly, and this includes using pesticides.

Rattlesnake Exterminating will not make individuals throw out their infested furniture. Instead, the crew will repeatedly check the furniture, and treat it. They work with heat, and have a one year guarantee for their bed bug jobs. On average, the cost of having a home treated for bed bugs costs $1,500. Rattlesnake Exterminating will also educate any business or homeowner on how to avoid getting bed bugs again in the future, and provide free bed bug inspections. Curley said that it is wise for land lords have the company search for bed bugs before a renter moves in, and after a renter moves out. Through this technique, the land lord will have a paperwork case in the event of an infestation.

In order to save money and emotional stress on treatments, Curley stressed that prevention is best for the community in the war on bed bugs.

“Being aware of them and understanding the nature of the insect,” Curley said. “It drinks blood. It’s attracted to carbon monoxide. You are the host, and your dogs are acceptable hosts. They will travel on dogs. Think about it. A dog is a mammal that has blood. They travel on bats. We’ve treated schools that have had bats in the attic and the bedbugs come down to the carbon monoxide in the secretary’s office. We’ve had to treat that. We’re in an epidemic now (and we) need to be aware of it.”

Locations bed bugs can be found

Box Spring
Couch and/or Chair
Mattress
Bed Frame and/or Head Board
Other
Walls and/or Ceilings
Baseboard
Dresser and/or Night Stand
Clothing
Bedding
Curtains
Luggage, handbags, gym bags and backpacks
Luggage racks (in hotel rooms)
In/around clutter (particularly on the floor)
Closets (mostly near the sleeping area)
Coffee tables and end tables (especially if bedbugs are found in a nearby sofa or chair)
Under rugs and at carpet edges