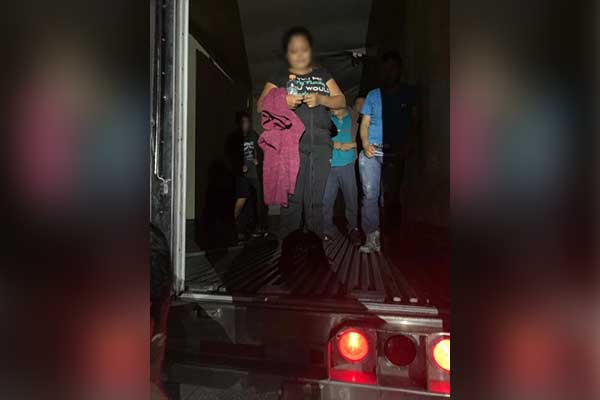 The first incident occurred shortly before 10 p.m. on Wednesday when a Tucson Sector Border Patrol agent inspected a Volkswagen Passat rental car at the immigration checkpoint on State Route 85. After questioning, the agent determined the two passengers were Mexican nationals illegally present in the United States. The aliens and the U.S. citizen driver were placed under arrest.

Approximately 20 minutes later, another agent patrolling near Ajo conducted a vehicle stop on a Hyundai Elantra. The car contained two U.S. citizens and two illegal aliens from Mexico. All four individuals were arrested, and the vehicle was seized.

A few hours later at the I-19 immigration checkpoint a Freightliner semi-truck pulling a refrigerated trailer was sent to a secondary inspection after a Border Patrol canine alerted to the vehicle. Inside the padlocked trailer agents discovered seven illegal aliens. All of the smuggled subjects were found in good condition. The driver was arrested, and agents seized the truck.

The U.S. citizens arrested in these incidents will face prosecution for human smuggling violations, while the 11 Mexican nationals will be processed for immigration violations.

Border Patrol warns that people can die or become seriously injured when placed inside compartments, such as trailers and trunks, not meant for human travel. Extreme temperatures, carbon monoxide poisoning, and vehicle collisions pose serious risks to passengers attempting to avoid detection.