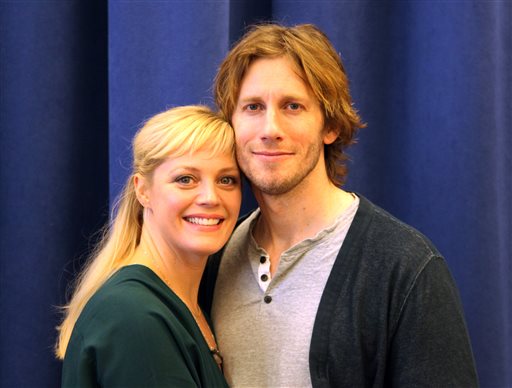 In this Nov. 18, 2015 photo, Elizabeth Stanley and Andrew Samonsky pose for a photo in New York. The couple star in a national tour of "The Bridges of Madison County," a musical based on the Robert James Waller novel, which was made into a 1995 movie starring Meryl Streep and Clint Eastwood. The show is about a four-day love affair in 1965 between a world-weary photographer and an Italian-American housewife. (AP Photo/Mark Kennedy)

NEW YORK (AP) — On tour this winter is a Broadway musical about the one that got away, in more ways than one.

“The Bridges of Madison County,” with a superb score by Jason Robert Brown, starts an eight-month U.S. tour on Saturday that features both a story about a lost soul mate and a chance at musical redemption.

The Broadway show that sparked it — starring Kelli O’Hara and Steven Pasquale — closed after just 137 performances in 2014 but the show’s staging and Brown’s Tony Award-winning songs get another chance to soar.

“I’m very grateful that these audiences around the country will get a much more direct experience of the piece,” Brown said. “To be able to really say, ‘This is the way we meant the show to be’ is really gratifying.”

The musical is about a four-day love affair in 1965 between a world-weary photographer on assignment to shoot a series of covered bridges in Iowa, and an Italian-American housewife. It’s based on the Robert James Waller novel, which was made into a 1995 movie starring Meryl Streep and Clint Eastwood.

It stars Elizabeth Stanley, who was last on Broadway as a repressed anthropologist in the revival of “On the Town” and Andrew Samonsky, who was in the recent Broadway revival of “The Mystery of Edwin Drood.”

“When the auditions came up, it was one of the few times where I allowed myself to want a job,” said Samonsky, from Ventura, California. “I think those simple, honest musicals really speak to me. I mean, I love a big, fancy song-and-dance show, too, but when you can do a musical like this, it’s really special.”

For Stanley, the tour will be a kind of homecoming: She was born and raised in Iowa until moving at age 10. She’s also looking forward to seeing friends at stops in Nashville, Tennessee, and Houston, Texas, as well as playing The Fabulous Fox in St. Louis, the closest stop to her parents now in Camp Point, Illinois.

Like Samonsky, Stanley saw “The Bridges of Madison County” when it was on Broadway and both were fans of Brown’s music after hearing his mid-1990s abstract musical “Songs for a New World.” (Says Samonsky: “I can definitely geek out being in this show.”)

Brown, who will be conducting the shows in Des Moines, at Los Angeles’ Ahmanson Theatre and at the Kennedy Center, said the whole touring cast impressed him with their ability to get genuine and personal.

“No one was going to get into this tour who was not able to draw from the ground, pull something from inside of them. It’s a really committed cast, which is important. It’s a show that asks for a lot of emotional connection.”

Director Bartlett Sher, who has handed the day-to-day directing duties to Tyne Rafaeli, his frequent collaborator, said “The Bridges of Madison County” may have struggled on Broadway but the road will prove different.

“I think this is just the beginning of a really long life for a show which I think will be around and performed pretty consistently for decades to come,” he said.

This story has been corrected to show the tour starts Saturday, not Friday.