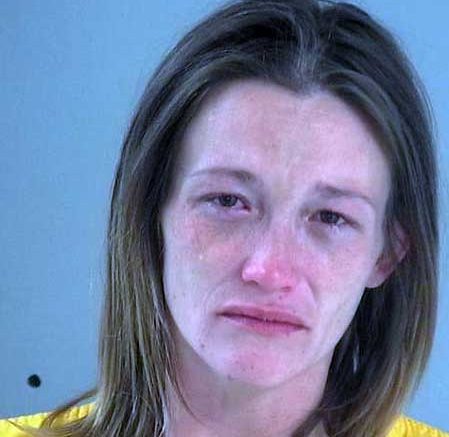 Contributed Photo/Courtesy GCSO: Kayla Ticer was booked into the Graham County Jail on charges of burglary in the third degree and aggravated criminal damage for breaking into the First Southern Baptist Church in Thatcher.

SAFFORD – A homeless and pregnant meth addict allegedly admitted to breaking into her cousin’s church and stealing odds and ends while hallucinating on methamphetamine.

Kayla Brey Ticer, 30, was arrested and booked into the Graham County Jail on Sunday, April 16, on charges of burglary in the third degree and aggravated criminal damage. Ticer allegedly admitted breaking into the First Southern Baptist Church at 2934 W. 8th St. the previous night and stealing several items. It reportedly took church workers a bit of time to clean the church enough so that it would be available for Easter services. Some of the things in disarray included papers strewn about and the church’s sound system being disrupted.

Officers already had Ticer in custody prior to learning about the break-in as they were initially called to a residence in the 700 Block of S. First Avenue about Ticer and a male subject being found in a resident’s garage. At that time, the couple were being asked if they had taken anything from nearby yards, and Ticer showed signs of recent meth use, according to a Thatcher Police report. Ticer was also found to be in possession of several items, indulging a Barbie doll, a set of guitar pics and a bible, that were later identified as being stolen from the church.

During her interaction with police, Ticer became erratic and paramedics were called to the scene as a precaution because Ticer is 32 weeks pregnant and was thrashing around threatening to hurt herself. Ticer continued to act in a belligerent manner upon the arrival of the paramedics and bit one of them on his arm. Lifeline Ambulance managed to transport Ticer to Mt. Graham Regional Medical Center (MGRMC), and the paramedic declined to press charges against Ticer, saying he knew her personally and that she normally wouldn’t have normally acted that way had she not been under the influence of heavy drugs.

The hospital confirmed Ticer had tested positive for methamphetamine use but deemed her fit enough for incarceration. She was then taken to jail, and the officer’s report was forwarded to the Graham County Attorney’s Office for charging.