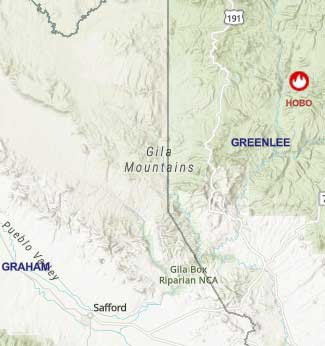 CLIFTON — Add the Hobo fire to the list of area wildfires to keep an eye on.

The Hobo fire is northeast of Morenci in the Clifton Ranger District of the Apache-Sitgreaves National Forest. It was discovered Friday, has burned about 400 acres thus far and is at 0-percent containment.

Meanwhile the Telegraph fire in the Tonto National Forest has burned 71,756 acres thus far and is also at 0-percent containment.

The fire has forced the evacuation of a portion of Miami, south of U.S. Highway 60 from Dairy Canyon to Mackey’s Camp; Lower Central Heights; the east side of El Capitan; Top of the World and Oak Flat Campground. Superior and portions of Globe are in Set mode.

The fire has also closed U.S. Highway 60 in both directions between Superior and Miami.

The Mescal fire on the San Carlos Apache Reservation has burned 65,825 acres and is at 23-percent containment.

The fire has forced the evacuation of the El Capitan area east of State Route 77. Residents of Coyote Flats, Soda Canyon and the San Carlos High School area, who had evacuated Monday, were allowed to return home Tuesday.

The fire has limited traffic on U.S. Highway 70, between Globe and Fort Thomas, to passenger vehicles only