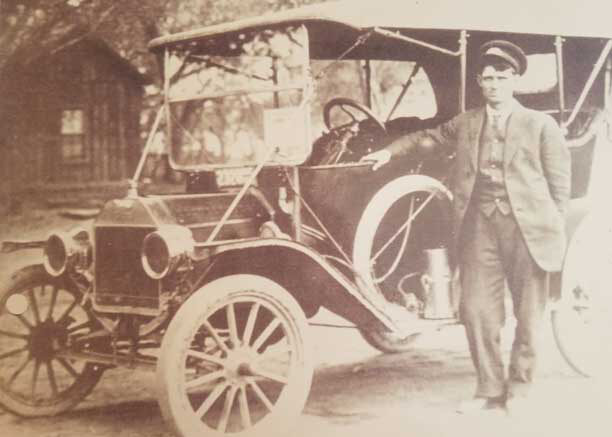 Joseph Nuttall was born April 8, 1890, in a little town settled by the Latter-day Saints who were there due to polygamy. The town was Colonia Garcia, Mexico. His parents were John Horatio Nuttall and Christena Hubbard, who had married in the St. George Utah Temple on April 20, 1887, and made their homs in Pima. They were only in Mexico a few months, returning to Pima.

Their children were Agnes, Joseph, Floyd, Etta and Karl. After moving to Hubbard, near their maternal grandfather, Elisha Freeman Hubbard, their family increased with Margaret, Christina and Robert.

Joseph’s father’s first wife, Laura Naomi Gardner Nuttall, had borne children: LaPrele, John, Ernest, Alice, Maud and Paul (plus four others who died). Joseph’s dad, who was a member of the St. Joseph Stake High Council, was a carpenter by trade, owned a sawmill on Mount Graham and a flour mill in Pima.

The Gila River, which runs through the Valley, would go on a rampage every time a good rain storm came up, washing away the brush/rock/dirt dams the farmers built to take the water out to farm the land. Many a day, he worked along with grown men on the dams and canals, even though he was really too small for teams and scrapers. Every farmer had to do his yearly assessment work on the water system.

Because they lived near their Grandfather Hubbard, he always had time to listen and teach. Joseph and Ernest were especially close and spent much time together. I his life story, Joseph detailed many pranks he instigated or participated in as a youth and as an older teenager.

As just little buttons, he and Ernest loved to hear the whistle of the train when they were in the foothills herding cows, as it had just come into the Valley a few months before. One day, they decided to stop the train as it went on its way to Globe, a mining town about 90 miles away. They obtained a case of axle grease and, with the help of some other boys, they smeared the track for nearly half a mile with the grease. Then, becoming scared for fear that someone would catch them, they ran out to Rogers Pond and put rocks in the empty can and sank it in the water.

The train stopped alright, whistled a lot, but no one said a word to them for more than a week. Then their dad took Joseph and Ernest into the mill one day and gave them a good talking-to, telling them they might have wrecked the train and killed someone. They never did that again.

A few other pranks he helped to pull were: tipping over toilets; on holidays putting someone’s horses and cows in someone else’s corrals; and, when a little bigger, they put a wagon on top of the schoolhouse piece-by-piece, putting it back together again. On New Year’s Eve, they put a donkey in the belfry of the church house and fixed hay so, when it reached to eat, the rope around its neck would ring the bell all night.

When Joseph and the Chelsey boys were leaving to go out on the range, they threw a skunk in the Hubbard schoolhouse before leaving — a new floor had to be installed.

He was courting a girl in Thatcher, and he and Carl Bryce shot out the lights in the dance hall because President Andrew Kimball and Bill Pace said that, “Shenanigans like that couldn’t be down in their town; the boys there would be caught and punished.” They weren’t.

At the young age of 14, Joseph quit school, against the advice of Judge McCalister, who begged him not to smoke and drink, and not quit school before graduating from eighth grade. He felt like he had learned everything by then and was quite a man, as he had taken a job in Metcalf with the dairy for Art and Milt Lines, milking 20 cows both morning and evening. He was under weight and became sick. The doctor told him he needed to put on some weight and quit smoking cigarettes. He had him drink raw cow’s milk, freshly milked. It helped him get well and he did stop smoking.

One day, the train had a chain break in the ore car. The train had to stop right by dairy and the fireman, engineer and brakeman had to get out and jack it into place to chain it down. While they were in the process, the brakes gave way and the engine began rolling the entire train down the grade. Joseph saw what happened and, being the youngest one there, ran to catch the handhold of one of the cars, climbed to the filled ore car, jumped from one car to another until he reached the engine just in time to apply all the brakes, which stopped the train just as it went on to the dump trestle. The trestle was 125 feet high. If it hadn’t been stopped, the train would have gone over the trestle and crashed into the residential part of town. Everyone was thankful he had the nerve, strength and knowledge to handle the problem.

Joseph became an expert cowboy, while riding for Turner West, Dick Bryce and the Mattice Cattle Company. He had many accidents on his horses, suffering some broken bones and many “close calls.” He left the life of a cowpuncher, pursuing a vocation of mechanic, as automobiles were the up-and-coming thing. He attended a mechanics schools in Kansas City, learning all about magnetos. From there to Globe, he installed magnetos on engines. He also got a job in the railroad shop, where he learned the machinist trade. This was followed by employment with the mines as a hoist engineer.

On Dec. 27, 1911, at the age of 21, he married 17-year-old Mary Velma Nelson. Their only child, Joseph Heber Nuttall, was born Oct. 24, 1912. The marriage was happy, but her mother was not. During one of their separations he, along with distant cousins Carl, Chris and Fletch Merrill, went to Mexico and had numerous adventures, such as shooting a boa constrictor17 times before it finally died, Stretched out, they measured it to be 27 feet, 9 inches long.

Joseph’s divorce from Mary Velma, and her subsequent death from an exploding gasoline iron Jan. 15, 1916, was very hard for Joseph. He drifted and married Marie Dallas, taking a job driving the stage from Solomonville to Duncan, then as a master mechanic at the Twin Peaks Mine. When the mine closed in December 1918, he became the Miami City powerhouse operator, saving the power plant from two German saboteurs one night, until the law could get there and take them. Also, during the flu epidemic, he drove the ambulance eight hours after his regular job, picking up the dead, taking people to the hospital and delivering medicine from the drugstore to homes all over town.

After the war, he and Marie relocated to Los Angeles, working a while in the movies, riding horses in Western pictures or doubling for stars that had to wreck automobiles. He was thrilled to handle the horses and chariots while making the film, “Ben Hur.”

The movie people were not to his liking and he wanted a better life, so he went to Parker to take charge of the Ford garage there, staying in 1923. Because Marie did not want to be in Parker, Joe went to Long Beach, Calif., bought a new home, got a job in a garage there and began buying and selling diamonds from men who had to sell their rings and stickpins. A friend would resell the gems and, sometimes, they would triple their money. With his regular wages and diamond money, he paid off his family’s home, bought a new car and some land in Oregon.

Joseph and Marie called their marriage quits; giving her all the property. He was quite sick but, after spending seven months as a traveling farm machinery salesman, he returned to Los Angeles broke but well. He next drove the night bus between Los Angeles and San Francisco, then driving a streetcar. He wanted to see the home folks, so he came to Safford and opened an auto paint shop, which he sold for a good profit. He then went to Bisbee, where he drove the Circle X Stage between Bisbee and Safford. On this line, Joseph became acquainted with a Ford big shot who sent him to Yuma, where he did body, fender and paint work.

In November 1928, he did a snazzy paint job for the “big boss,” who took him on a vacation trip to El Paso, Texas, where he met Eva McCown, a widow who became his wife in May 1929. After a few months in Yuma, the couple moved to Miami, Ariz., where he worked in a garage, then opened one of his own, which was successful until the mines closed.

A few years were spent near Eva’s folks in Arkansas and Tennessee then, in 1937, a move to Phoenix and several jobs in the war plant at Air Research, where he was the highest-paid mechanic repairman on the job. After a disagreement with a co-worker, he took his tool box and left.

With encouragement from his bosses and lead men, he set up shop under a big shade tree in his yard at 18th and Apache. Business was good and he worked day and night, eventually having a good building and good tools. For 10 years, Eva had cancer, and he tended her at home where she died, March 2, 1960.

His half-sister, Annie Farley, suggested he change his ways and get an LDS wife, namely their sister-in-law, Julie, Ernest’s widow, in San Diego. They corresponded a few months, and then Julie went to Phoenix to work for the winter. After their marriage Oct. 15, 1960, he sold his home and business, and they relocated to Strawberry, where both of them wielded hammers and saws, constructing their two-bedroom home, where they lived the remainder of their loves. He also kept their automobiles in tip-top shape, as well as those of friends and neighbors.

After a very busy and interesting life, Joseph passed away July 20, 1973, and is buried in Phoenix.

Special thanks to Julie Carpenter for this information. This and other individual and family histories may be found at the Eastern Arizona Museum in Pima. The museum is open Thursdays to Saturdays, from 10 a.m. to 3 p.m.