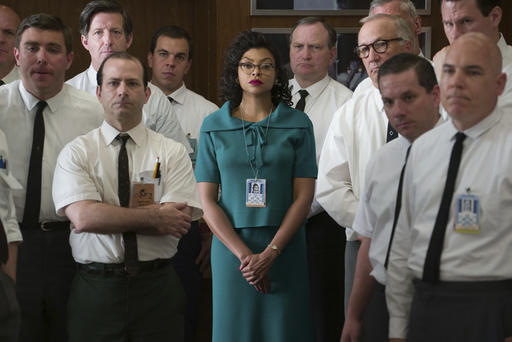 NEW YORK (AP) — Labors of love, one from Martin Scorsese, the other from Ben Affleck, proved costly at a casualty strewn weekend box office where the uplifting NASA drama “Hidden Figures” stayed on top for the second straight week.

“Hidden Figures,” about African-American mathematicians in the 1960s space race, sold a leading $20.5 million in tickets in North American theaters over the Martin Luther King Jr. Day holiday weekend, according to estimates Sunday. Fox anticipates the film, starring Taraji P. Henson, Octavia Spencer and Janelle Monae, will make $25.3 million when Monday is included, bringing its cumulative total to about $60 million.

The weekend was more remarkable for what didn’t work than what did. Both Affleck’s period gangster thriller “Live by Night” and Scorsese’s Christian epic “Silence” bombed in their wide-release debuts. Warner Bros.’ “Live by Night,” adapted from Dennis Lehane’s novel, earned a mere $5.4 million in 2,471 theaters. Paramount’s “Silence,” from Susaku Endo’s novel of 17th century Jesuit priests in Japan, took in $1.9 million in 747 theaters.

Both were high-profile projects that each filmmaker used their considerable sway to get made.

“Live by Night” was Affleck’s directorial follow-up to the best-picture winning “Argo.” Written, directed and starring Affleck, it cost $90 million to make, though rebates and tax incentives lowered its budget to $65 million. But critics said “Live by Night” was a step backward for Affleck, who spent much of his publicity campaign fending off questions about his plans to direct a stand-alone Batman film for Warner Bros. The studio, which declined to comment Sunday, estimates “Live by Night” will make $6.7 million over the four-day weekend.

The epitome of a passion project, “Silence,” which Scorsese contemplated for nearly three decades, represents a culmination of the director’s investigations into the nature of faith. While the film, starring Andrew Garfield and Liam Neeson, earned considerable respect from some critics, it failed to catch on in Hollywood’s awards season.

“It’s gotten great reviews and it’s Marty’s passion project, so we’re proud to be a part of it, and we’re going to keep putting it out there in front of audiences,” said Kyle Davies, Paramount’s domestic distribution chief.

“Silence,” never conceived as a particularly commercial release, cost about $50 million to make. The studio expects it to earn $2.3 million over the four-day weekend.

The most costly flop may have been Paramount’s family film “Monster Trucks.” It earned $10.5 million over the three-day weekend. Viacom took a $115 million write-down late last year on the movie, which cost $125 million to make. It was a rare admission, well before its release, that “Monster Trucks” would bomb.

The surprise success was the supernatural thriller “The Bye Bye Man,” from STX Entertainment. With some help from Friday the 13th on the calendar, the low-budget horror flick made $13.4 million.

Peter Berg’s Boston Marathon bombing docudrama, “Patriots Day,” took in a so-so $12 million in its first week of nationwide wide release. The CBS Films and Lionsgate joint release cost about $40 million to produce. But the film, starring Mark Wahlberg, earned an A-plus CinemaScore from audiences, suggesting it could have legs in the coming weeks.

Open Road’s “Sleepless,” a vigilante revenge thriller starring Jamie Foxx, failed to make much of a dent. It opened with $8.5 million.

Disney’s “Rogue One” added an additional $13.8 million to its coffers. The film is now poised to cross $1 billion shortly, with $980 million globally to date.

Paul Dergarabedian, senior media analyst for comScore, said audiences were inundated with too many films, some of which struggled to keep attention as they went from limited to nationwide release. “Hidden Figures,” ”La La Land,” ”Patriots Day,” ”Silence” and “Live by Night” all premiered in December before expanding in January.

“It really is the tale of the holdovers. We’ve yet to, at this point, have a breakout newcomer from 2017,” Dergarabedian said. “When you have so many platforming releases, aside from the top-performing ones, ‘Hidden Figures’ and ‘La La Land,’ the others have had a tough time getting traction or getting noticed within this sea of movies.”

Estimated ticket sales for Friday through Sunday at U.S. and Canadian theaters, according to comScore. Where available, the latest international numbers are also included. Final four-day domestic figures will be released Tuesday.