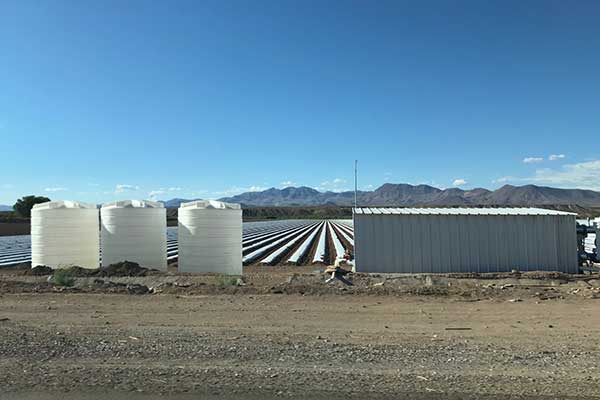 You may have noticed something new growing in the fields of Gila Valley Farms. As of May 31, 2019 Arizona farmers can legally grow hemp on their farms.

Arizona’s industrial hemp program was slated to start in August, but a bill proposed by Sen. Sonny Borrelli, R-Lake Havasu City, and signed into law by Ducey on Feb. 20, moved it to May 31. That meant that farmers can start planting hemp before the peak of the summer, when temperatures are too high. Hemp takes about 120 days from planting to harvesting. Crops that were planted now will be ready to harvest in September or October.

The legalization of industrial hemp received bipartisan support in Colorado and Arizona. In 2018, Gov. Doug Ducey signed legislation backed by Republicans and Democrats that authorized the Arizona Department of Agriculture to license applicants to grow and process industrial hemp. Arizona and at least 40 other states have enacted legislation to establish an industrial hemp program.

Hemp can be used to make a lot of different products — from clothing and cosmetics to insulation, rope, plastic and food. It can also be grown for seed, fiber and oils, such as hemp-derived CBD, which is used for pain relief, anxiety and insomnia.

Hemp and marijuana both come from the Cannabis sativa species, but they are not the same plant. Hemp has a very low concentration of tetrahydrocannabinol, or THC, which is what gives marijuana its psychoactive effect.

Although hemp won’t get you high, it does contain significant amounts of cannabinoid, cannabidiol (CBD), which is also found in marijuana. CBD is a nonpsychoactive cannabinoid, and its interaction with receptors in the central nervous system and immune system can offer medicinal benefits, making hemp-CBD concentrates popular ingredients.

Hemp has been used for hundreds of years to make rope. Many ships used hemp rope for rigging. Most of the hemp was grown in India, China, Germany and Russia. The Marijuana Tax Act of 1937 put so many restriction of hemp growers that many U.S. farmers stopped growing it.

It made a brief comeback in World War II, when the Japanese invasion of the Philippines cut off hemp supplies to the Allies. In 1942, the government created a campaign called “Hemp for Victory,” and the Department of Agriculture produced a short film that encouraged farmers to grow hemp as part of the war effort.

As soon as World War II was over, though, the federal government ended incentives and hemp farming essentially ended.

Hemp is a new and untested crop for Arizona farmers. Whether it will replace cotton as a main crop in the Gila Valley remains to be seen.