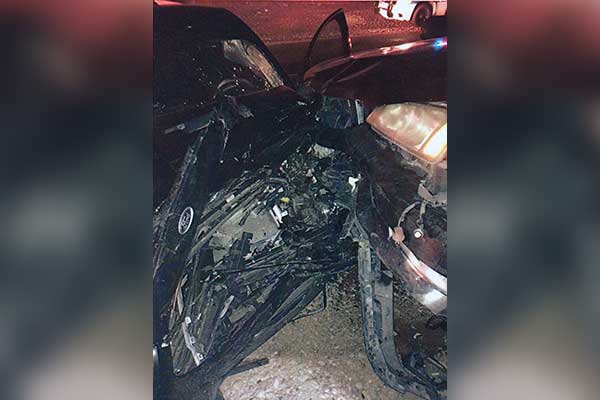 SAFFORD – Last Thursday night around 11:00 pm authorities were dispatched to an accident near the intersection of 20th Avenue and Golf Course Road. Just prior to receiving this call, police had responded to a call regarding a fight on 12th Avenue and Paradise Circle, but when they arrived a neighbor reported everyone had just left prior to their arrival.

When an officer arrived at the accident, there was a group of people standing in the middle of the street. A truck and a sedan had collided head on in the southbound lane of 20th Avenue. The airbags had deployed in both vehicles. Several individuals tried talking to the first officer on the scene at the same time, but the initial chaos was brought under control as other officers arrived. The additional officers were able to block traffic and gather everyone that was involved.

As an officer spoke with the people involved, the passenger of the sedan reported that she was getting a ride home from the party. She had fallen asleep and she thought that the male driver stopped to get food. The woman woke up to the crash. She said that she believed the male driver was knocked out briefly during the accident, but he woke up and they both got out of the car. The woman had gone to check on her friends in the other vehicle and the male driver of the sedan, who was standing by the car, began walking away. She called out for him to come back but he didn’t respond.  Several officers stayed on scene and another officer went to the hospital to interview the victims that had been taken there. Both vehicles were towed from the scene.

After the officer left the hospital, he was informed that the driver of the sedan was at the Emergency Room. The officer went back and spoke with a woman who was the owner of the car involved in the accident. She stated she lets the man drive her car back and forth from class and practice. When the officer spoke with the male driver, he said that he was giving his friend a ride back to the dorms. She fell asleep and he went to get food. He then stated that he was on his way back to a party on Paradise Circle to pick up another friend. On the way back, the truck entered his lane and hit him head on. The officer asked why he had left the scene of the accident. The man said that he couldn’t remember and didn’t know he had left the scene. He remembered being in an accident but only remembered waking up in his friends car. The officer informed him that he could be charged with leaving the scene of an accident with injury. The officer asked if he had been drinking, and the man stated he had not. He submitted to a breath test that registered .000. The officer noticed as they spoke the male seemed a bit disoriented from the accident. Another friend in the room reported to the officer they had been told at their dorms the male had been in an accident and when they looked at him they felt he wasn’t acting right, so they brought him to the hospital.