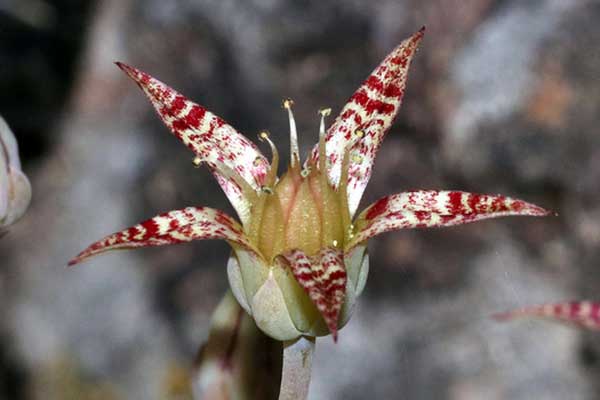 Bertram’s stonecrop is a rare blooming succulent found in the wetlands of the Patagonia Mountains and the Coronado National Forest in southeastern Arizona. (Flickr)

VISTA, Ariz. – A conservation group has given notice it intends to sue the federal Department of the Interior for failing to make decisions about protecting 26 animals and plants under the Endangered Species Act.

According to the Center for Biological Diversity, the U.S. Fish and Wildlife Service created a work plan in 2016 to decide the protected status of Arizona’s Bartram’s stonecrop and beardless chinch weed, along with American wolverines, Franklin’s bumblebees and others. However, Noah Greenwald, the center’s endangered-species director, said the Trump administration has dropped the ball.

“As far as we heard,” he said, “they were working on it, but they didn’t finish multiple findings that they were supposed to do in 2017 and 2018 under their work plan.”

Greenwald said these species are on the brink of extinction and need protection now, but politics are preventing them from getting it. He said regulations specify that listing species and designating critical habitat takes two to three years – but on average, it has taken the Fish and Wildlife Service 12 years, and in some cases, decades.

Agency officials could not be reached for comment because of the government shutdown.

Greenwald said the delay could mean any decisions eventually made could end up being too late.

“One of the species on there, the Franklin bumblebee – that’s an Oregon species. No one’s been able to find one of those since 2006, so it may very well be extinct,” he said. “That just kind of highlights the degree to which many of these species are imperiled.”

He called the federal system to designate threatened or endangered species “broken” and predicted disaster if it isn’t reformed.

“Most scientists think that we’re in an extinction crisis,” he said. “The estimates are that species are going extinct at a rate a thousand times background. It’s just a shame that we have the Trump administration throwing dirt in the gears of our environmental laws, including the Endangered Species Act.”

Greenwald said this isn’t the first time conservationists have sued the agency for dragging its feet. In 2011, the Center and WildEarth Guardians settled multiple lawsuits that required the Fish and Wildlife Service to catch up a backlog of decisions, resulting in the protection of nearly 200 species.

The lawsuit notice is online at biologicaldiversity.org.