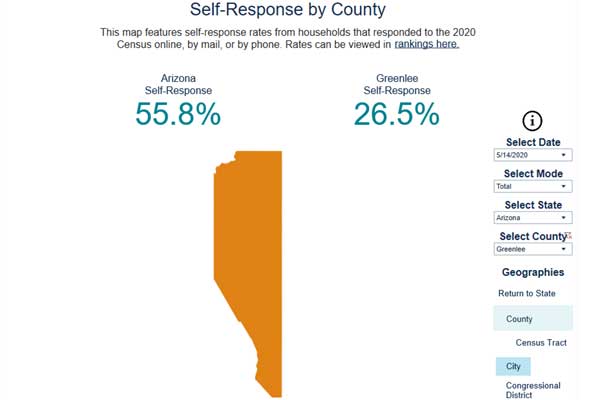 THATCHER — On Friday the U.S. Census Bureau released updated data on response rates by county, and Greenlee County continues to rank in the bottom four counties in the state.

Both Clifton and Duncan are lagging behind the unincorporated portions of the county and have the same response rate — 20.8 percent — ranking each as 76th in response by Arizona cities and towns.

Graham County sits at No. 8 in the state with a 45.5-percent response rate.

Safford is the 23rd best city in the state in terms of response rate, at 58.6 percent, outpacing both Graham County’s overall response rate and the entire state, which is at 55.8 percent.

The top county in the state is Pima at 60.6 percent, followed by Maricopa at 60.3 percent and Yavapai at 57.3 percent.

The top responding city is Oro Valley at 73.4 percent, followed by Sahuarita at 70.8 percent and Gilbert at 70.4 percent.