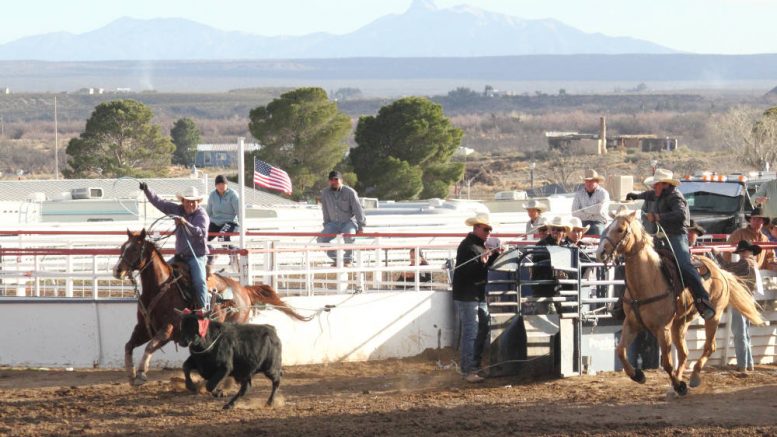 SAFFORD – The chute clangs open and a calf bolts out across the arena with a brief head start. Pounding after him, a mounted cowboy throws a rope around the calf’s head, wrapping the other end around the saddle horn. Using his horse, the cowboy steers the calf as a cowgirl follows, trying to get a rope around one or both of the calf’s heels. Then, both horses back up, stretching the calf out. An official waves a flag, and officials record the time. This is team roping, and it can happen in less than six seconds.

Team roping was one of several events held by the Arizona High School Rodeo Association (AHSRA) at the Graham County Fairgrounds on Saturday and Sunday. Around 300 high school and junior high students competed in what is both a demonstration of actual working ranch skills and family traditions. The event brought in about 1,000 people from all across the southwest, with families and friends supporting the young adults in a sport as American as Country music. 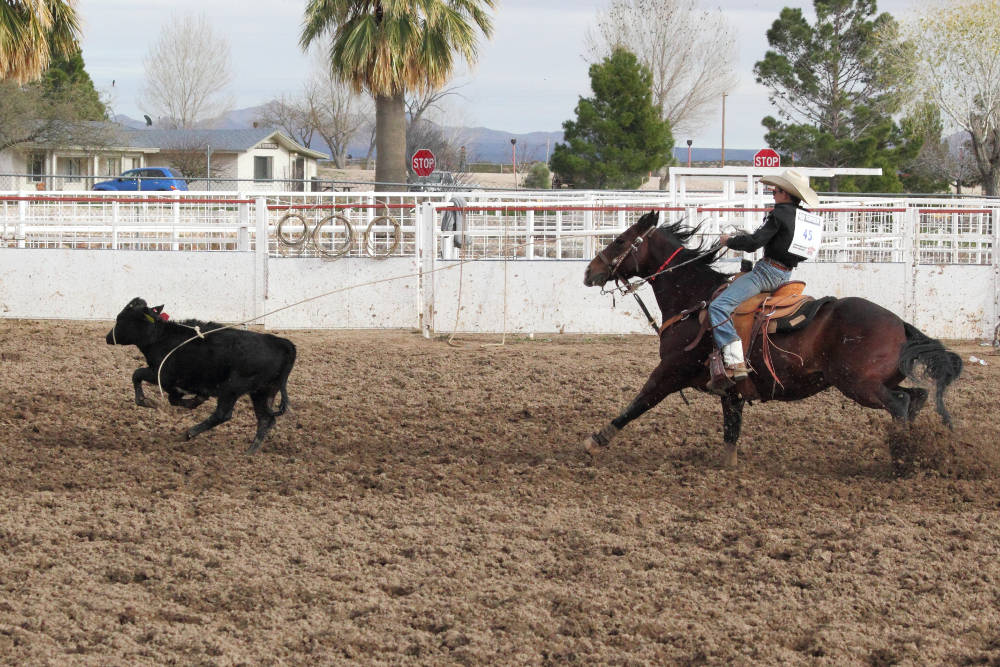 Eric Burk Photo/Gila Valley Central: A cowboy chases a calf in the junior high breakaway event, where a calf is given a head start and a single rider must rope him.

The rodeos move around the state from September until the state finals in June. The top four competitors from each event then compete at nationals. Junior high school and high school competitors meet at the same rodeo, but compete separately. There are 13 types of events in the AHSRA Rodeo, including steer and bronco riding, barrel racing and team roping. Event winners receive buckles purchased by the sponsors.

“It’s a team event, and you have to work together,” she said.

Ben has been riding her whole life, and hopes to make a living using her skills.

Wyatt Kent of Casa Grande and Daylan Barton from Flagstaff won the high school team roping with a time of 5.360 seconds.

Barton said he grew up in a rodeo family and he enjoys carrying on the family tradition.

“My dad did the high school rodeo,” he said. “I just wanted to be out there with them too.”

The event requires a lot of mutual trust between the two riders. Barton and Kent were selected to be partnered together, and they did not have any chance to practice together prior to the rodeo. 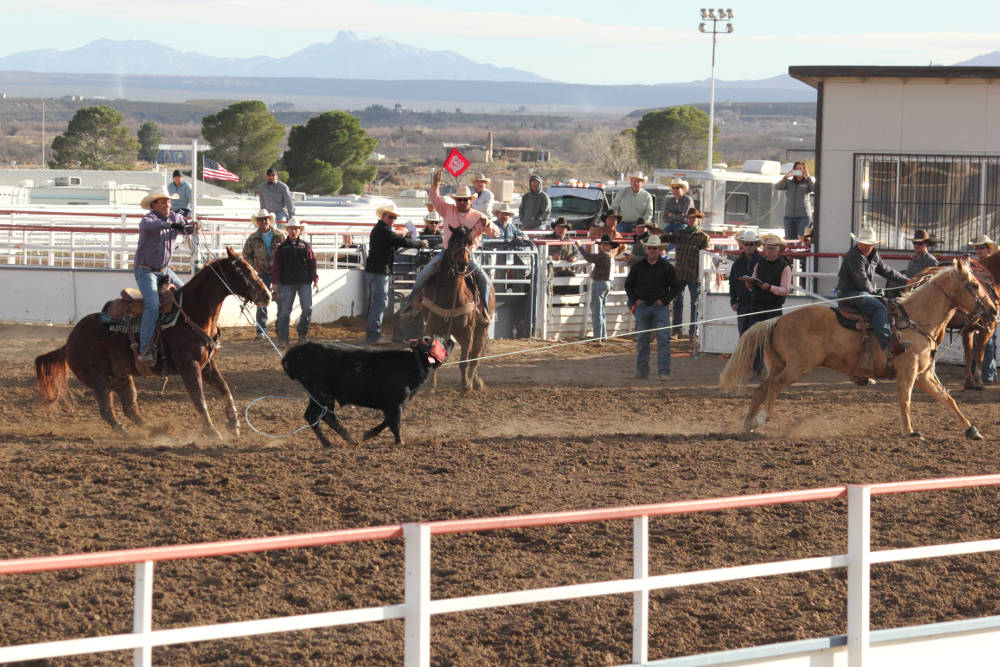 AHSRA President Jack Assini said his organization is a charter governed by the National High School Rodeo Association (NHSRA) and that rodeo is a powerful tool to train quality young adults.

“We have very, very strict rules on sportsmanship (and) behavior, both at the rodeo and outside the rodeo,” Assini said. “And it’s just a great bunch of kids.”

Assini said in his six years as president there have only been six cases to go before the disciplinary board.

Involvement in the AHSRA is also a good way to finance college. The charter gives away $14,000 every year, while the NHSRA gives away more than $50,000. Members may also receive scholarships from schools, just like any other sports scholarship. Assini said a fair amount of competitors receive financial benefits to go on to secondary schools in a typical year.

“We’ll graduate 50 seniors and then 30 of them will get to go to a junior college for free because they’ll go on a rodeo scholarship,” he said.

Participating in AHSRA is a family commitment. The charter is mostly made up from volunteers, with only a paid secretary.

“I think if you come to any of our rodeos, we have over 300 members,” Assini said. “It truly is a family sport because we go from sixth grade all the way to 12th grade, and without the families a majority of the kids wouldn’t even be here.” 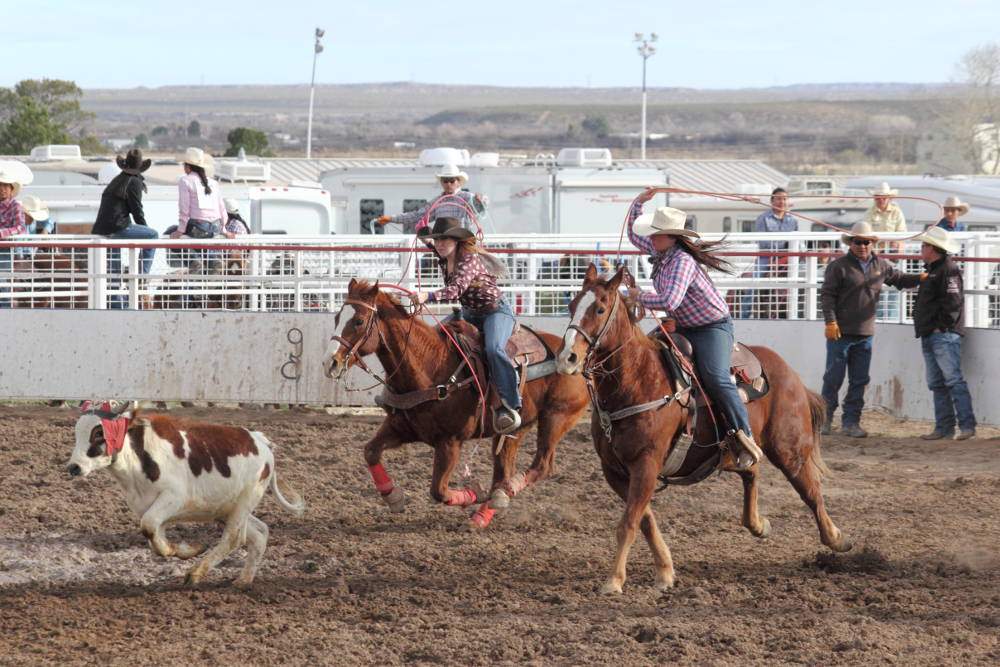 Assini said the rodeo has a mutually beneficial relationship with small communities, and Graham County is a consistently excellent host. Local sponsors help bring the rodeo to town, including Freeport-McMoRan Inc., which is the largest financial contributor.

Assini said community support is critical, but does not go unrewarded.

“We bring a lot to the community too,” he said.

Assini estimated that, including family members, the rodeo brings 1,200 to 1,400 people to the area for the weekend, who then spend money at local restaurants and stores.