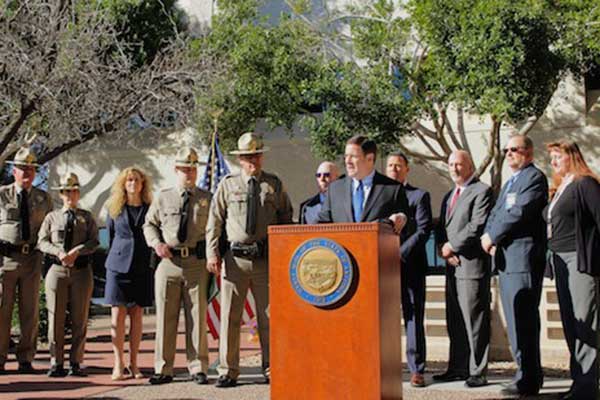 “As the son of a cop, I know firsthand the sacrifices made by our men and women in uniform, as well as their families,” said Governor Ducey. “They deserve our constant gratitude and respect. That’s why Arizona is making sure they’re paid what they deserve. While there’s always more we can do to support our law enforcement and public safety personnel, this investment will go a long way to ensuring these employees, who make up roughly 40 percent of all state workers, are recognized and valued for their work.”

“Governor Ducey has followed through with his commitment to public safety,” said Captain Daven Byrd, Fraternal Order of Police, Lodge 32 President. “On behalf of the Fraternal Order of Police, I want to reiterate how grateful we are that the hard work, dedication, and commitment to excellence by state law enforcement, is being recognized and supported by Governor Ducey and this state. The budget has been presented and now Arizona State Troopers and Correctional Officers are counting on lawmakers to follow through and turn this plan into action.”

“Serving inside a prison can be a thankless job, but today, every corrections officer in Arizona has reason to feel appreciated,” said Clint Roberts, Correctional Officer II, President of Arizona Corrections Association and member of Arizona Police Association. “If there is one message I’d like to relay to our state legislators, it’s this — we ask you to support these raises for our correctional officers and public safety.”

“This investment represents more than just a pay increase — it is critical for helping DPS attract and retain Troopers and support personnel,” said Sergeant  Jimmy Chavez, President of Arizona State Troopers Association. “This is a step in the right direction for addressing many of our critical needs that support our public safety mission. We look forward to seeing this support for DPS employees make it through the legislature and into law.”

Highlights of the governor’s public safety pay raise package include:

The governor’s fiscally conservative budget also makes targeted investments in other high-need areas, including investing $165 million for the second year of teacher raises as part of increasing teacher salaries 20 percent by 2020.